You are here:
Home / Blog / Whatever / Why I’m Keeping My New MacBook Air

As many of you know a couple of weeks ago I purchased a new MacBook Air as a replacement for the MacBook Pro I’ve been using the last few years. Some of you were interested in knowing what I thought of the Air.

Now that I’ve had about 2 weeks to play with it I can offer some thoughts. I do like it, plan on keeping it, and have found it works well for my needs. Let’s get to the details.

Note: In the last post I used images I found online. This post features images of my MacBook Air and my old MacBook Pro. 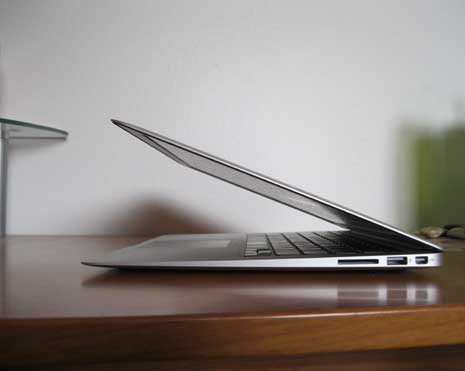 In order to put my thoughts into context you should know a little about how I use a laptop, which is mainly as a desktop replacement. My laptop needs to be able to handle everything I do.

Most of the time that means I buy the most laptop I can afford when it’s time for a new one. Prices over $3,000 don’t scare me. My laptop is, after all, the most important piece of equipment I use to run a business.

The last year I’ve started thinking a better approach would be to have 2 computers, a smaller lighter laptop that can handle most everything I do and make travel easy and then a more powerful desktop for when I need more power and/or a bigger screen.

My typical day mainly involves working with text files. I’m usually writing or coding. My next most common tasks relate to working with images and graphics. I’d like to work more with video, but don’t at the moment.

The safe choice would have been a new MacBook Pro. It would represent the most laptop I could afford. However I’ve wanted an Air ever since they received a refresh last fall.

I had a few hesitations about the Air in regards to power/speed, size, and glare, but as long as I felt it could deliver enough laptop, it was what I planned on getting. I was hoping the ssd flash memory would make up for the lower RAM. 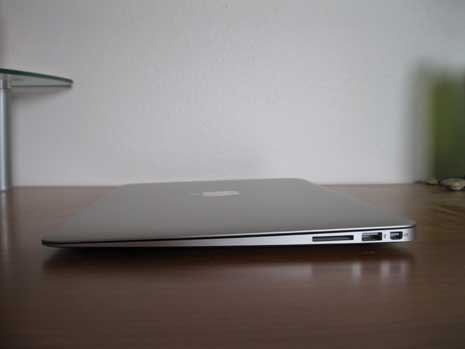 Here are some specs of the 2 laptops I was thinking about along with the same specs for my 2008, pre-unibody MacBook Pro.

When you see a (?) listed it’s because I can’t quite remember the spec on the old laptop. The number before the (?) is likely close, but I’m sure it’s not quite correct.

You can click on the new Pro and Air links to see the full specs at Apple’s site.

When I considered the specs above my main concern was the greater RAM I could get on a new MacBook Pro, but given a new Air still had more than my old Pro I figured the Air would work well enough.

With the above in mind let me share my 2 weeks of experience with the MacBook Air. 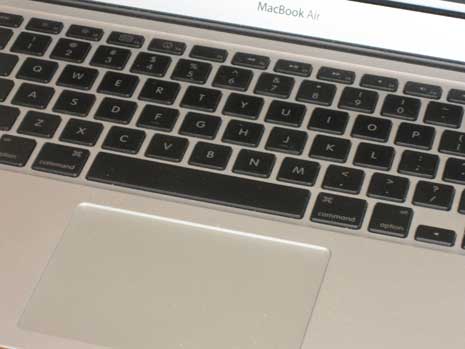 For something so thin and light, the Air feels sturdy. I assume that’s due to the unibody construction.

It’s sturdy enough that the hinge between monitor and keyboard can take more force than the weight of the laptop. If you push too quickly and too hard on the monitor you can easily tip the Air.

When the Air is on my lap it hardly feels like it’s there. I haven’t carried it around with me when I leave home, but it’s not hard to see how it will be a joy to travel with.

I think the keyboard is the same as the new MacBook Pros. It’s a little different than my old Pro. The keys are flatter and there’s no backlighting.

The lack of backlighting isn’t an issue as I usually have a light on when I’m using the laptop. I’ve yet to think I wish I could see the keys better.

It did take me a couple of days to get used to the keys, which are in slightly different positions from what I’m used to. I occasionally reach for something that’s a little further to the left or right than my muscles remember. Typically though for every time I switch to a new computer.

2 weeks later and I like the keyboard better, especially as my old laptop had a few keys not working too well (‘a’, ‘m’, ‘p’).

The touchpad is also a little different than the one I’d been using. My old Pro had a dedicated button. The Air doesn’t. Neither does a new MacBook Pro.

I guess I’ve always dragged my finger across the button when clicking. When I do that now, I sometimes move the cursor prior to the click which then no longer works.

I’ve been getting used to it and getting better about not dragging before clicking, but it’s been my biggest annoyance. Hardly a big deal though. 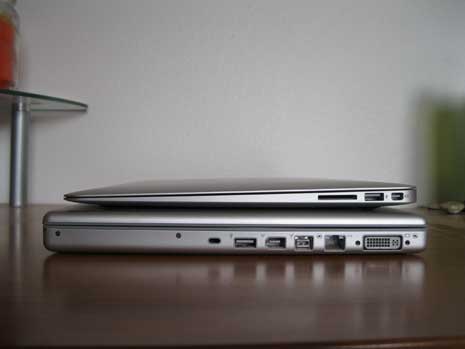 I’ve been using 15 inch screens for a decade and worried 13 inches might feel too small and cramped.

That hasn’t been the case.

Maybe it’s because the resolution is the same, or that 13 inch isn’t that much smaller than 15 inch, or that I adjust quickly, but the smaller size hasn’t been an issue at all.

At first I did notice I was working on a smaller monitor, but within a few days I was simply working on a monitor.

Everything looks just as good as it did on the old laptop, only it’s all a little bit smaller. Not a lot smaller, but a little smaller.

If you think it might be to small for you it’s worth going into an Apple store if there’s one near you. Play with the Air for a little while and switch to a 15 inch Pro and then back again. You should get a reasonable idea whether or not you can work on a 13.3 inch monitor. 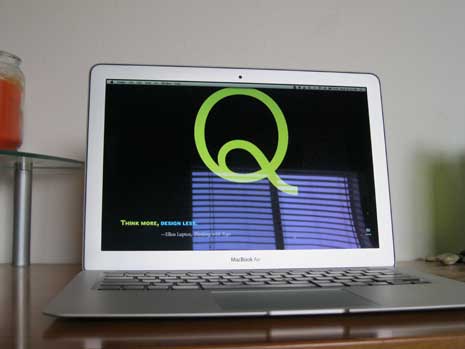 I’ve been using antiglare monitors since they were first available. I really don’t like glare and I was nervous about how it would be to not have an antiglare screen, especially as I work with a light right behind me.

Fortunately this also hasn’t been an issue for me, though I can easily see how it could be an issue for others.

How much glare you see depends a lot on the angle you’re viewing the monitor. Glare is worse when you

I tried to show this in the images above and below this section. In the image above I knelt down and looked at the screen from below to capture the image and you can clearly see the reflection of the window behind me.

In the image below I simply stood up and took a picture from above. The Air itself never moved and I assure you the window didn’t either.

In both images the glare is magnified from what I usually see. My live view looks better than what was captured in either image.

When the monitor is sitting near 90 degrees from the keyboard and I look at it straight on, I don’t see any glare. Under those conditions I feel as though I’m looking at an anti-glare screen.

Since those are the normal conditions under which I work, everything has been fine for me.

If you like to have the screen tilted further away from you, then you probably will see some glare. Again if you can visit an Apple store and tilt the monitor back like you normally would, you should be able to quickly tell if glare will be an issue for you.

I’m not sure if the lighting I use is helping. Recently I switched to using energy efficient light bulbs, which throw off a cooler light than the soft yellow bulbs I had been using. I thought I’d mention it in case it does make a difference and you want to give it a try. 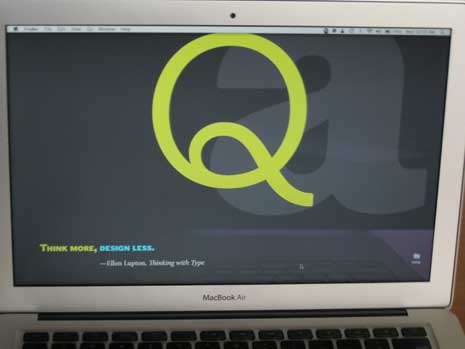 This was the big issue for me and probably is for you as well. On the bright side I knew the Air was more powerful than the Pro I was replacing.

I also suspected that speed bottlenecks with the old laptop had more to do with reading and writing data from and to the drive than any lack of processing power.

The majority of work and play I do on the computer isn’t all that processor intensive as I mentioned above. More processing power would be nice, but realistically I probably don’t need more.

The first night with the Air it got very slow. So slow that my initial thought was I’d be exchanging it for a Pro almost immediately. Firefox wouldn’t open, programs kept freezing, and I had to restart by turning the power off and on.

Then I got the bright idea to actually restart once through the operating system and everything changed for the better. I introduced human error into the process of migrating data, which I think caused the initial slowness.

Since the restart everything has been noticeably faster than the old MacBook.

Programs open much quicker (1 or 2 bounces as compared to 10). I can also have more applications open for longer periods of time.

I still get an occasional beach ball and Firefox still slows down some after watching too many videos. The Air isn’t perfect, but overall everything is noticeably faster than the old MacBook Pro.

Unfortunately I have no way to compare and contrast with a new Macbook Pro. All I can tell you is everything is fast enough for me. The flash drive does make a huge difference and I can’t see myself ever again buying a laptop without flash memory. 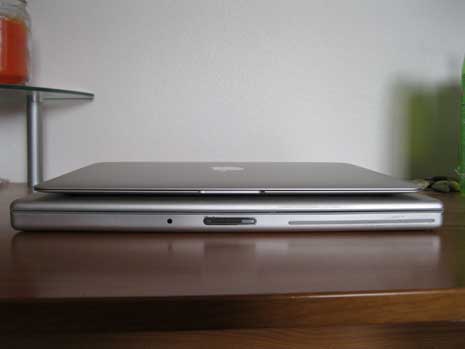 I thought I’d collect a few other reviews of the MacBook Air for you.

There’s no rhyme or reason to the links above. Just me doing a search or two and grabbing a few random reviews from the results. I tried to grab reviews featuring the 13 inch Air. 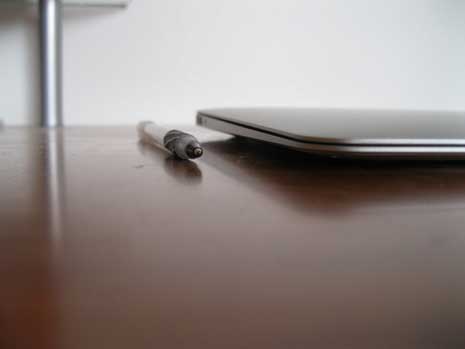 You should be able to tell I’m happy with my purchase and plan on keeping the Air.

There will always be part of me that wonders how it compares with the new Pros and I’ll likely be jealous of whatever upgrade the Air gets later in the year, should it get one.

Still I’m very happy with the MacBook Air I purchased.

The potential issues I thought I might have turned out to be non-issues for me. I can see how they might be issues for others, but I’m good.

If you are thinking of getting an Air hopefully something in this post has helped in your decision. Feel free to ask specific questions in the comments or shoot me an email if there’s something I didn’t mention here that you’d like to know.

My best advice is to go into an Apple store if one is nearby and play with both the Air and the Pro and see what you think.

Keep in mind Apple won’t charge anything if you come back within 2 weeks and want to return your purchase. That way you can test out the Air and see if suits you.