You are here:
Home / Blog / Web Design / Visual Grammar: How To Communicate Without Words

I often use the phrase “visual design” when describing what we do as web designers. Recently I came across what I think is better phrase, “communication design.” When we design and build websites our goal is usually to communicate something to an audience.

Communication requires language. That language can be aural as in the spoken word, it can be gestural as in sign language, or it can be visual as in design. The more you understand any language the better you can communicate using that language. The visual language of design is no exception.

Design elements are like letters and words. When we add design principles and apply them to our elements, our words, we form a visual grammar. As we learn to use both we enable ourselves to communicate visually. 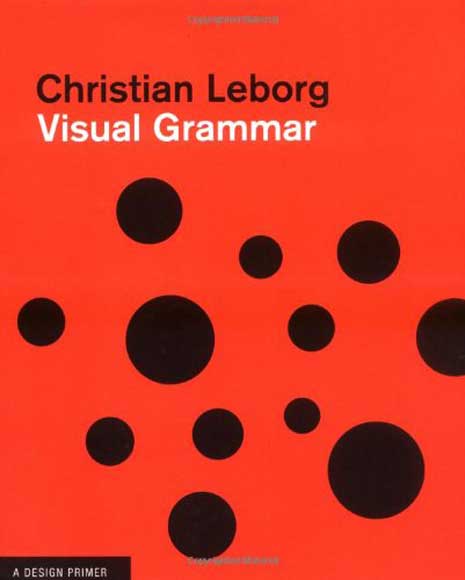 Most of the information in this post is coming from Christian Leborg’s book Visual Grammar shown above. From the preface of the book:

The reason for writing a grammar of visual language is the same as for any language: to define its basic elements, describe its patterns and processes, and to understand the relationship between the individual elements in the system. Visual language has no formal syntax or semantics, but the visual objects themselves can be classified.

The last point in the quote above is important. It would be great if we could place a circle on the page, a rectangle to the right of it, and a curved line to the right of the rectangle and have it mean the same thing to all people. It won’t. That makes it harder to think and communicate visually, though also much more interesting. It’s one reason a single design problem can have so many different design solutions.

However, we can classify much of this visual grammar. I’m going to deviate just a bit from the way Christian organizes his book and organize visual grammar as:

As you read through the rest of this post you’ll see many connections to design principles that myself and others have written about. In many ways this post and Leborg’s book are a way to organize all those principles and ideas to see how they fit an overall visual grammar

Objects can be abstract or concrete.

Abstract objects are idealized shapes that can’t physically be created. For example take a point. A point by definition has no area. It only has a position. Any point we try to draw will have some kind of area if we are to see it and once it does, it ceases to become a point. It can only exist as an abstract concept and not as a physical thing.

Concrete objects are perceived within defined limits called contours. Inside and including the contour itself is our object, our shape, our form, and outside the contour is everything else. Forms or shapes can be geometric, organic, or random (sometimes called abstract). A circle is an example of a concrete object. It’s contour being the curved line that encloses it.

Any element we place on the page is a concrete object. Remember abstract objects can not physically be created. Abstract objects exist to talk about objects in general in order to better describe them.

Whenever we place two or more objects in relation to one another we form a structure. We describe these structures by the patterns they form. We must be able to recognize the presence of a pattern in order to describe the structure.

Structures have structure lines connecting objects. These lines are the axis along which the objects are arranged. Structure lines may be visible or invisible and they may be active or inactive.

As with objects, structures can be abstract or concrete. 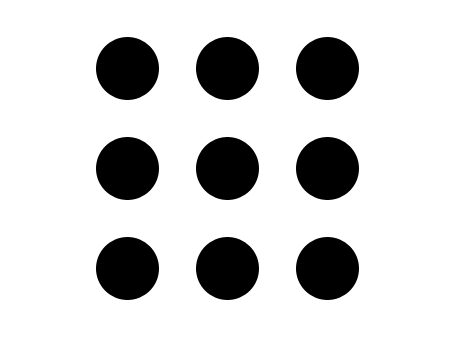 Even when the structure lines are invisible we can often see them in our minds. Through the gestalt principle closure we fill in what’s missing to complete the picture. Again consider the image above. While no lines are visibly connecting the circles, it’s easy to imagine straight lines from the center of one circle to the next. Structure lines are not limited to running through the center of objects though.

The circles above are an example of a formal structure. The objects are evenly distributed. They’re symmetrical and arranged on a grid. The structure lines are either horizontal or perpendicular.

Formal structures are not the only type of abstract structures we can encounter or use. Structures can be categorized as:

When the structure organizing the objects can be judged by the eye alone we say the structure has visual distribution. Each form is allowed to occupy a similar amount of space as the others in the structure.

All compositions or objects are bound within certain limits of the surface on which they exist. These limiting forces follow certain axis or paths which are considered the structural skeleton of the composition or object.

Structures that can be seen and/or felt are textures. Textures can be formed from either objects or structure lines or both. Textures can be ornamental, random, or mechanical and we can classify them in the same way we classify abstract structures. They can be formal, informal, gradations, radiations, or spirals.

The elements we design, the objects we place on the page don’t move. Ignore for a moment the idea that as the browser gets resized elements can move or we can use javascript to move elements around the page or use css and javascript to respond to different mouse and keyboard inputs. For the sake of this discussion our elements don’t move and our compositions are static representations.

To convey the idea that some activity is taking place on the page we generally need to create some kind of sequence of objects or create the illusion of the activity through some static representation of it.

Instead of trying to give you a couple paragraphs on each kind of activity, I’ll summarize them in the table below. Notice how many of these activities are the design principles you’ve seen myself and others write about. In the future I’ll also look to covering some of the activities below in greater detail.

I’m sure many of the above terms needed no definition and you were likely familiar with all or many of them. We’re building a vocabulary in order to be able to communicate better about design and also through design. Again notice how several of the above find their way into the principles of design.

As with activities there are a number of relations defined by Leborg and again notice how many of them are design principles that I and others have given a more detailed treatment. Since many of these relations are deserving of their own post, I’ll again present a table summarizing each here and look to writing more detailed posts about those I haven’t covered in the past.

As with the table of activities above, I’m sure many of these relation terms were familiar to you and needed little or no definition. As with the activities we’re building a vocabulary to talk about design and to use design to talk to others. Many of the terms in both tables above are deserving of their own posts, some of which I’ve already written about and others I’ll write about in the future.

As communication designers it’s our job to communicate. Communications requires language and for designers that language is visual (PDF). How can we communicate if we don’t understand the language to at least some degree?

In life we can communicate through the spoken word or through gestures. In design we’re bound by a visual language. Even the words on the page are made up of characters of type which are abstract shapes. Written language itself is a visual representation of spoken language.

This post has been an introduction to the grammar of the visual language we use in each of our designs. The more we understand that grammar, the better we can speak the language, and the more effectively we can communicate with our audience.

This visual language, this visual grammar, is the context within which we study design principles. When we learn to use girds or better understand typography or color we are doing so in order to communicate more effectively with our audience. The principles are the trees. Visual grammar is the forest.