You are here:
Home / Blog / Web Design / How To Design A Sticky Site: Stickiness Part I

As visual designers our goal is to communicate ideas and messages to an audience. We want our audience to remember the ideas we’ve conveyed to them long after they’ve left our sites and we want them to share those ideas with friends and acquaintances. We want our messages to be understood and to stick. 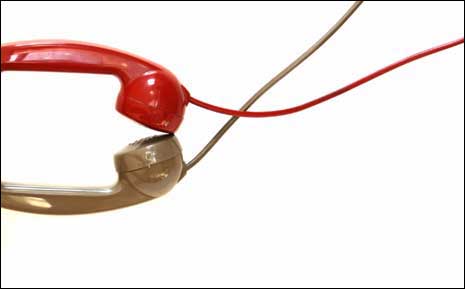 Some ideas seem to get passed around from one person to another until they become part of the cultural consciousness. Other ideas never make it past a person or two. Why do some ideas seem to thrive, while others die quickly?

How can we create sticky designs that allow the ideas we want to communicate live long healthy lives.

Stickiness is a way to greatly increase the recognition and recall and sharing of an idea. It’s about communicating something and having that something spread far and wide. It’s about having people remember something and share it with friends. It’s about the something you communicated living and moving far beyond the place it was initially conveyed.

If you search the web for how to make a website sticky, you’ll find plenty of advice for using related links or requesting comments, advice designed to keep people on your site longer. This isn’t what’s generally meant by the term sticky.

The advice (good advice by the way) is designed to get people to stay on your site. Stickiness is about having your site stick with people after they’ve left.

Sticky ideas are understood, remembered, and shared. And just as important they’re effective at changing people’s thoughts and behaviors. If you’ve ever come across an article or image or story that you seem to encounter wherever you turn, the article, image, or story was a sticky one.

The term stickiness (or stickiness factor) was first publicized by Malcolm Gladwell in his book The Tipping Point. Later the Heath brothers, Chip and Dan, wrote a book Made to Stick, in which they identify and share the characteristics and traits of ideas that stick. If you haven’t read either, I’d highly recommend both. Most of this post comes from the latter book. 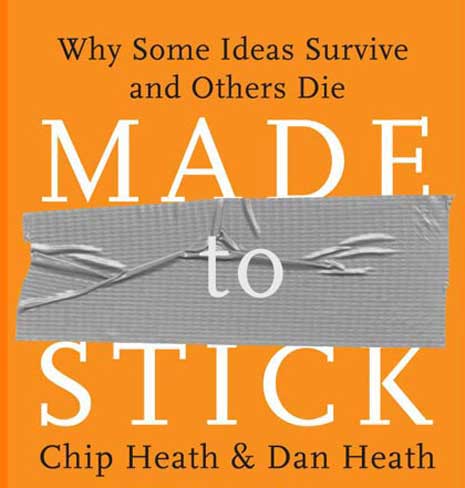 How Do You Make Ideas Stick?

Chip and Dan have identified 6 key variables with the acronym (SUCCESs – the last ‘s’ being silent) that make ideas stick. They correspond directly to the 5 items above with a 6th item (listed first) for creating the idea itself.

The 6 keys above can be reduced to 2 central concepts.

I want to take a look at each of the 6 key variables in a little more depth and doing so will take more than a single post. We’ll look at the idea of simplicity, finding the core of your idea, today and over the next couple or three weeks look at the variables that go into communicating your core idea.

Even with a short series of posts we’ll only have scratched the surface so I’d urge you to read Made to Stick if you haven’t and while you’re at it read The Tipping Point too. 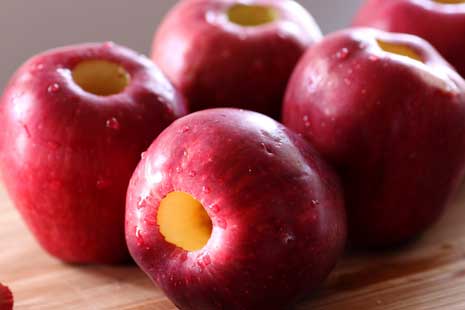 Simplicity—Finding the Core of Your Idea

Finding the core of your message keeps what’s important in focus. It strips away everything superfluous and brings the essence of the idea into light.

An article can only have one lead. Same goes for your sticky idea. If you try to say too much you inevitably say nothing. Your main message would get lost within the other unessential messages. It’s the principle of choices, which tells us less options makes it easier to choose.

Simple doesn’t mean shallow, though. Your idea, while simple and succinct should not sacrifice the depth of your message. Think proverbs instead of soundbites.

A bird in the hand is worth two in the bush

Consider the proverb above and think about how much it communicates as simple as it is. It’s core is a warning against greed. The bird in your hand is tonight’s dinner. You already have it. The 2 birds in the bush may be tonight and tomorrow night’s dinners, but you don’t have them.

What you have is worth more than possibility of what you might have. It’s better to have a small and certain advantage than the potential for a greater one.

Whether or not you agree with the advice, it’s pretty clear the idea has been a sticky one having survived some 7 or 8 centuries. The idea is simple, compact, and profound. 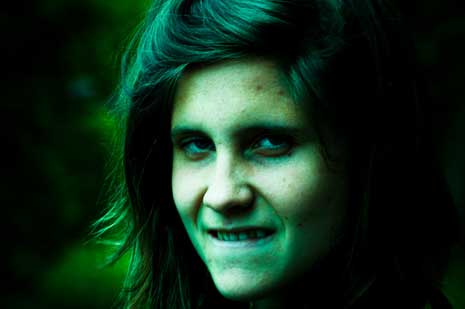 The Curse of Knowledge

Once you become an expert on a subject it can be hard to communicate ideas about that subject to those who aren’t experts. You’ll naturally use terms and concepts that to you are simple, but to the novice are complex and confusing. This is the curse of knowledge.

We’ll revisit the concept again when talking about concreteness, but I mention it here as a reminder of how difficult it can be to strip away everything to find the core of an idea. Remember that you’re communicating these ideas to someone who likely has a lot less knowledge about the subject than you do. 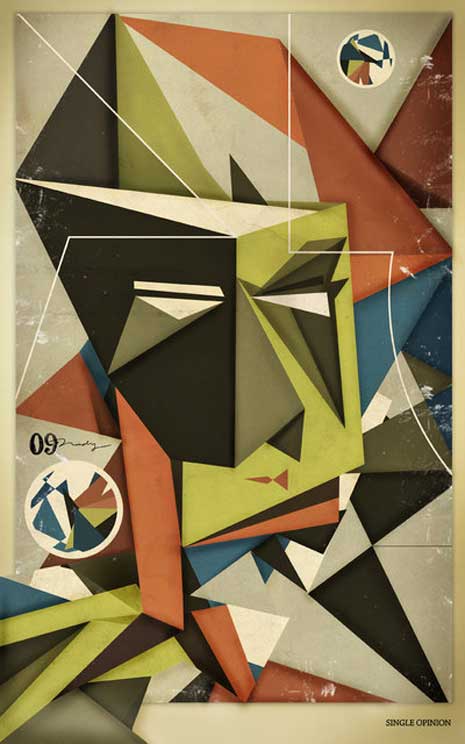 What do you do when you need to communicate a lot of information in a single idea or message? The way to simply communicate complexity is by making use of your audience’s existing schemas.

A schema is a mental framework that helps organize and interpret information. Schema’s carry with them a variety of ideas and concepts.

For example if i say sports car you can easily imagine one. i don’t need to tell you that a sports car has 4 wheels and 2 doors and a sleek aerodynamic shape. I don’t have to tell you it’s fast and handles turns around corners well. Those concepts are all carried in your schema of a sports car.

In Made to Stick Chip and Dan use the example of a Pomelo.

A pomelo is the largest citrus fruit. The rind is very thick, but soft and easy to peel away. The resulting fruit has a light yellow to coral pink flesh and can vary from juicy to slightly dry and from seductively spicy-sweet to to tangy and tart.

That might help you picture what a pomelo is. How about this.

A pomelo is basically an oversized grapefruit with a very thick and soft rind.

Both explanations above describe a pomelo, but the latter makes use of your schema for a grapefruit. It’s a much more succinct description and likely forms the stronger image. It’s far more memorable than the first description and has a greater chance of sticking.

Think of analogies, metaphors, and to a lesser degree similes. Each attempts to communicate complex information by using an existing schema. The new information is built on or compared to a wealth of existing knowledge you already have. 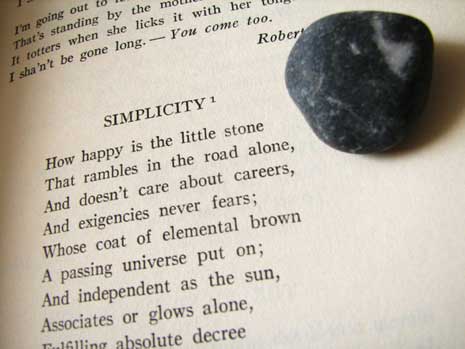 What ways can we use the above information when designing a site? The first thing is to understand the core idea or goal of the site. Why does the site exist? What’s its purpose? What is it trying to do? These are questions you should be asking before beginning any design.

We can carry the idea of finding the core to each page of the site as well. What goal does any given page have? How can we design the page to push people toward that goal.

Generally a site and even a page will have more than a singular goal. Your site might exist to make a sale, generate a lead, convert a visitor to subscriber and so on. Still it should have a primary idea or message to communicate.

Think of a tagline? Isn’t your tagline meant to simply and succinctly sum up what your site and business is about? Isn’t a tagline the core idea behind your site.

When someone lands on any page of your site they should be able to understand what the site is about instantly. This is usually done through a combination of the site name, the company logo, the tagline. On the single page it would also include the main heading. Consider the idea of simplicity in all of these.

We might also add in the idea of unity and harmony across a site. A unified design is one where everything is working together to communicate the same central message. When all your design elements agree they create a whole that is greater than the sum of its parts. They help to place the focus on what’s most important.

Stripping away the unessential might also lead us toward minimalism. I don’t think the idea of simplicity means we should only create minimalist designs, but it does imply that any design we create should be effective when we strip away the eye candy and it does imply that no matter what style, your design should only include what’s necessary to communicate your message.

When there’s nothing left to take away you’re left with the core. 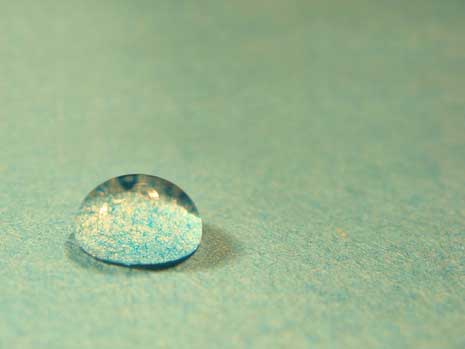 If a tree falls in the forest does it make a sound? If an idea doesn’t stick, does it have any value? An idea that falls away the moment it’s uttered has no power. It could be the most brilliant idea in the world, but so what.

A sticky idea lives. It gets passed from one to another and becomes part of the cultural consciousness. At its best it has the ability to effectively change thoughts, attitudes, and behaviors.

The first step of making your ideas stick is the idea itself. Your idea needs to be simple and succinct. You need to strip everything away and find the core of the idea. Only then does the idea have a chance to stick.

The next step in making your idea stick is to communicate it to others in a way that makes them want to share it further. We’ll begin looking at how to communicated your simple idea next week.