You are here:
Home / Blog / Web Design / Images Of Faces: What Do They Communicate?

Images of people draw our attention. However, different images with different people will affect us differently.

How do we perceive images of people? How do they affect us and how do they affect the way your design is perceived? When choosing an image to convey a particular message are there certain facial features you should look for? Is there an ideal way to crop the image so it communicates best?

Three principles of design that involve how we perceive images of people are attractiveness bias, face-ism ratio, and baby-face bias.

Each offers clues into what your viewers will subconsciously think when seeing images of people in your designs. An understanding of these three principles will help you choose people images that work in harmony with your design.

Attractive people are even preferred in hiring and will make more money, all other things being equal.

I hope you’ll agree that attractive people are not automatically smarter, more competent, or more moral than unattractive people, nor do they deserve a better fate in court or a larger bank account solely on the basis of their looks.

However we seem predisposed to favor attractive people, likely due to reproductive instinct.

My guess is most of the above is already known to you in some degree and that were you to pick between two images of people to place in a design you would naturally choose the person more attractive to you. 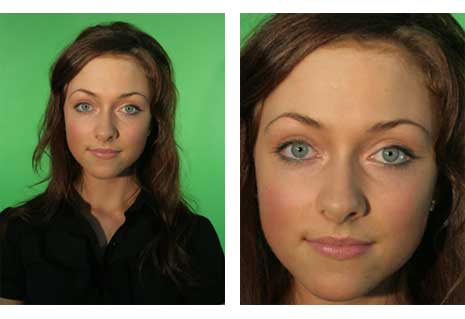 The term and idea behind face-ism originated during research into gender bias in the media. It had been observed that images of men focused mainly on their faces, while images of women more often featured their body in addition to their face. This was observed across cultures and was thought to reflect gender-stereotypical beliefs in regards to the characteristics of men and women.

In experiments with college students, students were asked to draw images of men and women and told they were only being evaluated on their drawing skills. Both male and female college students had a tendency to draw detailed faces for men and included more of the body when drawing women. Women’s faces were drawn with less facial details.

The face-ism ratio is expressed as:

People who view images with a high face-ism ratio tend to rate the people in those images as being more intelligent, dominant, and ambitious than the images of the same people with a low face-ism ratio.

Each of the links below will take you to a PDF that explores face-ism in politics. 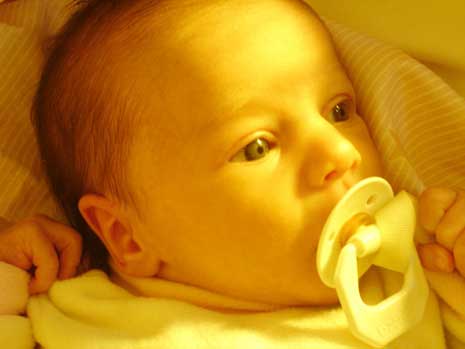 Babies typically have round features, big eyes and a small nose, a high forehead, a short chin, and lighter skin and hair color than adults.

Baby-face people might have difficulty being taken seriously when expertise, authority, or confrontation are called for.

Baby-face bias exists across all age groups and cultures. It’s seen across many mammalian species. Baby-face characteristics and bias are even seen in objects.

When it comes to face-ism ratio you want to choose or crop images based on the message you’re trying to communicate.

When it’s important to convey more thoughtful associations you want to use a high face-ism image. Crop the image so it shows as little of the body as necessary.

When your design calls for associations with physicality and sensuality you want a low face-ism ratio. You want to show more of the body in the image.

The previous points will be true regardless of gender.

I think most of us would like to think that we judge people based on things that go beyond physical characteristics. The simple fact is we’re biased toward people based on how they look.

Attractive features are often those more conducive to reproduction and so we tend to view those features in more positive light. There’s a reason why you see beautiful people in movies, on tv, and in advertising.

Babies are innocent and helpless. They need adults to survive. Again it’s only natural that we’d see baby-face features in a similar light even in adults.

When choosing images of people for your next design consider the subconscious meanings those images will convey. Match as best you can the people in images with the message you’re trying to communicate and crop those images accordingly. Like it or not people will associate positive and negative feelings with those images based purely on physical attributes.