You are here:
Home / Blog / Web Design / How Critiquing Others Can Help Improve Your Designs

Last week Paul Burton shared some thoughts on A List Apart about Artistic Distance and how creatives need to be able to step back from their work in order to see it better. We can get too close, too emotionally attached to our own work masking the ability to see it for what it is.

Paul talked about Dribbble and Forrst, two sites with goals of providing communities that could offer feedback and critique to creatives. Unfortunately as Paul suggests things haven’t panned out as planned. The sites tend to be more showcase and inspiration than a way to get good feedback. Comments tend to be the of the superficial “great work” instead of offering any meaningful critique.

That’s one person’s opinions, but it strikes me as accurate. I’ve seen much the same thing even as I enjoy both sites.

The rest of Paul’s article talks about why critique is important and how to offer it. I’ll let you read his article for the details. I wanted to share a story I’ve shared before about how putting in time to help someone else by critiquing their work helped me even more. 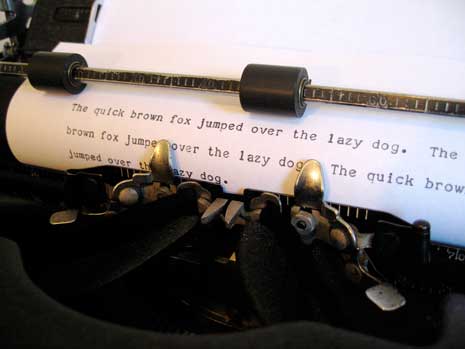 A Writing Exercise Showing the Value of Critiques

Years ago I enrolled in a creative writing course and as part of the course we all submitted our work to the instructor and every student in the class so they could critique it and offer feedback.

On the surface this seemed to be for the benefit of those being critiqued as they could learn how they might make their work better. However I think just as, if not more, important it was an exercise for those offering the feedback. Our critiques were to follow some specific guidelines, most important of which was to:

After receiving everyone’s feedback on my writing, it was obvious few put in any time on the exercise. Some didn’t take the time to offer feedback of any kind, but even those who did often held to the minimum the exercise asked. Only a few people took the time to get something out of it.

It wasn’t always easy. Some of the works were, shall we say, less than good and it was hard to find 3 things I could honestly say I liked. Other works were very good and it was a challenge to think how they could be improved. In both cases I did find those 3 and 3 things. It took a lot of studying and analysis. I read each story and poem multiple times, making notes as I did.

It’s what I should have been doing to my own work, but I was too close to it. I didn’t have the same distance from my work as I had from the work of a group of people I’d just met. I didn’t have any emotional connection to them or their writing. I had artistic distance. I was far enough away where I could see with greater objectivity what worked and didn’t and even better how I might make improvements.

Over the course of the summer I probably critiqued about 15–20 short stories, chapters, and poems. In the end I came away from the course a much better writer, mainly due to the work I’d put in giving feedback to others, than any feedback gave me. 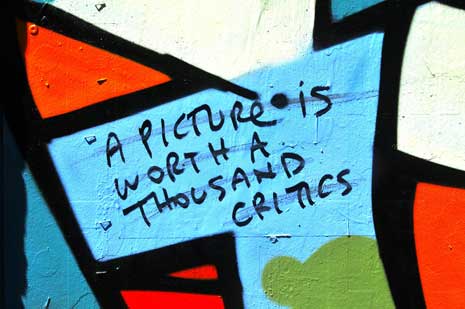 The Benefit of Critiquing Websites

I’m sure you’ve stopped at a site before and appreciated it’s design. I’m sure you’ve also visited some sites and thought the navigation would work better over there or the first paragraph on the home page could be rewritten to lead people deeper into the site.

Instead of being impressed with some of our fellow designers and underwhelmed with others, why don’t we put in a little extra effort and think through why we like one design and dislike another and in both cases really think about how we could improve them?

You’ve probably looked at something on a site and viewed the source code to understand how it was built. Why not do that with the overall design instead of just the technique? You don’t have to share your feedback with the designers, though perhaps in some cases they would find it helpful. This is more an exercise for yourself.

If you don’t like the colors used in one design think about why. Do they not work together? Do they not compliment the products being sold? Do they send a conflicting message? What colors would work? Improve the site by choosing what you consider to be a better color scheme.

You can take it as far as you want, even copying down the source code of the site and tweaking it to improve those 3 things. I think if you do you’ll find your own designs improving and you’ll develop a greater sense of confidence in your skills.

Since it’s not your design you’re critiquing you’ll have artistic distance from it and be better able to look at it objectively. 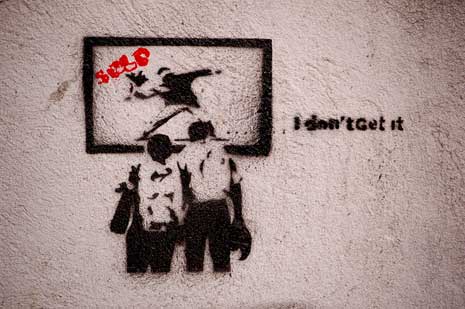 A few years ago when I first mentioned the writing exercise I made an offer at the end of the post that if anyone wanted I would critique their blog. A couple of readers took me up on it and I offered feedback according to the exercise I described above. I listed 3 things I liked and 3 suggestions for improvement.

Since I mentioned the exercise again I’ll make a similar offer, though this time I’ll only critique the design. If you’re up for it send me a link to a site you designed and I’ll write a post with my feedback. Keep in mind I’m only one person with an opinion and just because I like something or think something could be improved, it doesn’t make me right.

Again I think the real value in this is for the person offering the feedback so I stand more to gain than you do. However, it might help to see someone else critique a design as an example for how you might critique one too.

If anyone is game send me a link. No need to feel shy or worried about what I might say. The nature of the exercise is to offer the critique in a positive way.

Even if you want don’t feedback on a design, do think about taking the time to analyze the designs of others and think about why they work and how you could improve them. If you put in the time and effort it will pay off for you. You’ll gain a better understanding of what works in general in the design of a site and you’ll also start to see how some artistic distance can help you spot errors in your own work.

Have you ever studied the designs of others in detail and thought about why they did or didn’t work? Have you ever taken the time to truly critique the work of another figuring out how you might improve on their design? What did you think? Did you find the effort worthwhile?