You are here:
Home / Blog / Web Design / Why You’re More Creative Than You Realize

In 1922 at the age of 67 Alfred Wallis began painting. Until that time he had been a deep sea fisherman and later a marine stores dealer, professions hardly considered to be creative. How does someone who’s shown no creative ability for most of his life end up having his paintings hanging in museums?

What is creativity? Are you creative? How can you become more creative? 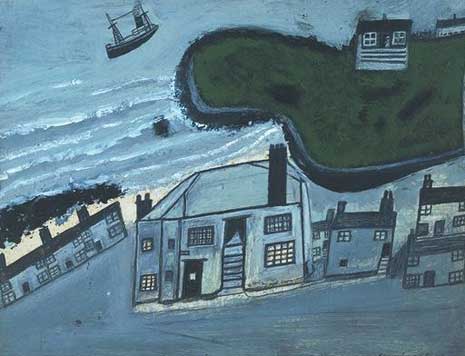 A couple of weeks ago via 37 Signals, I found the video below of John Cleese talking to an audience about creativity. The video is 10 1/2 minutes long and worth the time to watch.

He talks about how ideas come from the unconscious mind and how our subconscious solves problems while we sleep.

His general suggestions are to remove distractions and interruptions and to create an environment where the subconscious feels safe to come out and play. Here are a few quick notes I took while watching the video.

I’ll let you watch the video for the details. Again it’s 10 1/2 minutes and worth watching in my opinion. 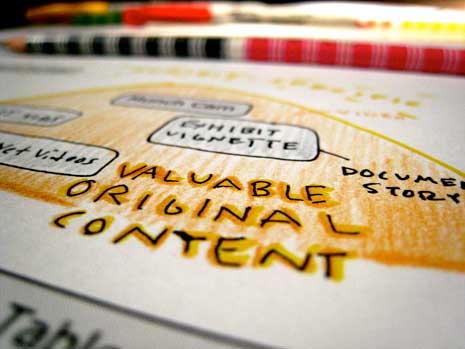 Here’s a definition I found at Answers.com

Creativity is the ability to produce something new through imaginative skill, whether a new solution to a problem, a new method or device, or a new artistic object or form. The term generally refers to a richness of ideas and originality of thinking.

New and original are two words often used when describing creativity. However creativity doesn’t mean wholly new and original, which I think gets lost in the definition.

An artist may not create the canvas or paints she uses. She may paint trees, mountains, sky, and water, none of which she created. She may use blue and green, colors she certainly didn’t create. In fact no single part of the painting may be something the artist created, yet the painting as a whole can still be both new and original and the artist said to be creative.

Here’s another definition of creativity from Andy Rutledge

Creativity is an inborn capacity for thinking differently than most, seeing differently, and making connections and perceiving relationships others miss. But most importantly, it is the ability to then extrapolate contextually useful ways of employing that data: to create something that meets a specific challenge.

Andy manages to avoid the words new and original and instead uses the word differently. Creativity is thinking differently and seeing differently than others. It’s making connections others don’t make and perceiving things others miss. 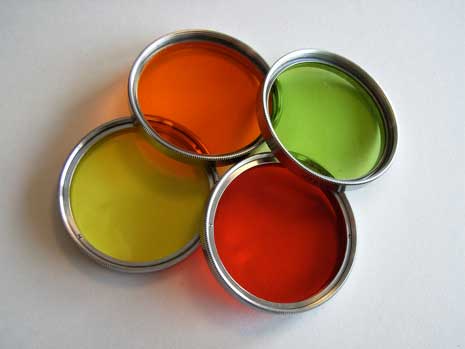 Creativity is a Filter

To me creativity is a filter. It’s about taking in the world around you, filtering it through your thoughts and experiences, and producing something that attempts to share what you see. It doesn’t have to be creating something entirely original, but rather recombining things in new and different ways.

No one else is exactly like you. You’re interpretation of the world around you will be different, new, and original, by default. By filtering the world through your thoughts and experiences you develop your own creative voice.

Sometimes all it takes to be creative is observation. Consider the George Carlin routine where he compares baseball and football. If you’ve never seen the routine here it is below. It’s about 5 minutes long.

The routine is clearly creative. Is there anything new in it? Not in the specific information Carlin shares. The new, the original, the thinking different, is simply a matter of observing two different sports and the language we use in describing them.

Carlin points out their differences in a specific way and we find it funny and creative. In some ways he created nothing, just pointed out what we already knew. Yet he created a routine from those observations that none of us ever did and we laugh.

We’ll look at creativity through observation a little more further down in the post. 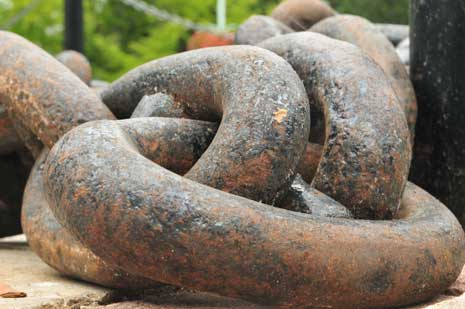 Creativity is a Link in a Chain

As an artist you are only a link in a chain, and whatever you find or whatever you do not find, you can find comfort in it.
—Vincent Van Gogh

Van Gogh saw himself as a link in a chain. He borrowed from those that came before added what he could and expected others to then borrow and build on his work.

Artist have always borrowed from and been inspired by those that came before. Creative works are seldom if every wholly original. We assimilate the works of past masters and add something of our own. Generations that come after us will do the same with our work.

Good artists copy others. Greats artists internalize others and then mix in something of their own. The work of great artists is a combination of prior links in the chain with their own link in that same chain.

Blues artists have always built on this links in a chain tradition. You learn to imitate the riffs of those that inspire you and play those riffs in your own way, through your own filter. You combine the riffs of different musicians who came before you and in doing so create your own new riffs, your own new blues.

A certain amount of Jimi Hendrix’s sound comes from his being left handed. He played guitars made for right handed people and played them upside down. He restrung them, but the simple act of holding an upside down guitar forced his playing their music to be different.

Other left handed blues guitarists like Albert King, also played a right handed guitar, but left the strings alone, meaning the strings were in reverse order. Notes were in different places and chords needed to be formed differently. You would have no choice but to develop an original style simply by doing something differently

Both King and Hendrix are playing the same basic notes and riffs, borrowed from those that came before. Each then added a little something of his own. Those that come after do the same. The only thing that changes is which link in the chain you borrow from. Listen to the two videos above and hear how Hendrix borrows from King who borrowed from others.

Check out some of the others who have also covered the song Born Under a Bad Sign. Each is creative. None are original in the sense of having written the song. 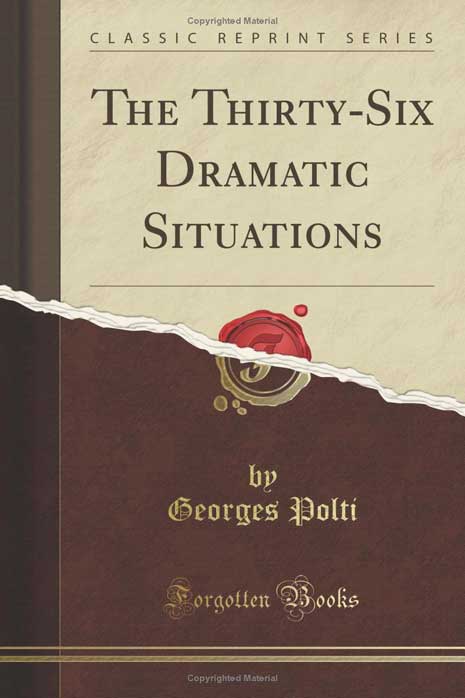 It’s All Been Done Before

In 1920 Georges Polti published 36 Dramatic Situations in which he reduced all works of fiction to one of 36 different dramatic types. Several of those types are very specific to the Ancient Greeks and when those are removed there were about 22 (if memory serves) possible stories you could tell.

Every novel written this year will be one of those 22(?) stories. Does that mean all those novels will lack creativity?

Obviously not. The point is to redefine what it means to be new. New sometimes means different. If you solve a problem in a way different from how others have solved the problem you did so creatively. You didn’t necessarily do something completely original, but you did something in a way others hadn’t.

How many novels have you read that were pretty much the same as other novels you read? The names and places change, some plot details change, the setting changes, but how different is the story?

Think of any genre of fiction and think of a story you read and see if you can fit it into one of Polti’s dramatic situations. I guarantee you can. 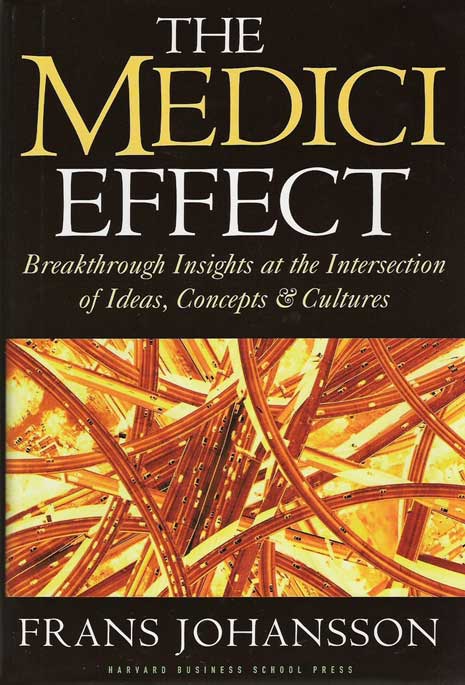 A couple of years ago Brian Clark posted about the content crossroads and talked about finding new ideas by connecting seemingly unrelated ones.

His post comes from the ideas in the book The Medici Effect (PDF), which I highly recommend reading. The PDF I just linked to is the entire book and it’s free.

The premise of the book is that when you step into the intersection of different fields, cultures, and disciplines, you can combine existing concepts into a large number of new and extraordinary ideas.

By sitting in the intersection you take in ideas from several places, filter them through your thoughts and experiences, and produce something from the new connections you’ve made.

Seeing these connections doesn’t just happen. it all comes down to observation. From Brian’s post some of the ways you can observe differently and find your way into the intersection are

As you train yourself to observe better and differently you’ll find yourself at the crossroads, at the intersection of different things more often. Your subconscious will come up with new ideas. You’ll be more creative.

You observe the world around you, make connections between seemingly disparate things and ideas, filter those connections through your thoughts and experience, and ultimately produce something different, new, or original. 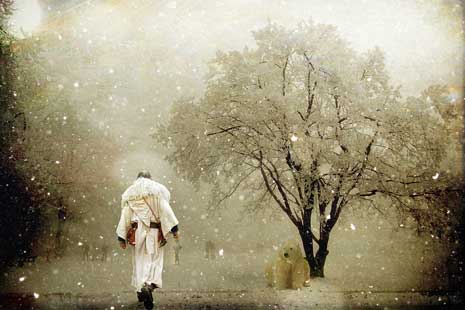 Whenever you step out of the noise of thinking, that is meditation, and a different state of consciousness arises.

Being creative is sometimes seen as a magical thing that some possess and others don’t. I don’t think that’s how it works. I think the nature of human beings is that we are all creative. We all have the potential for creativity.

Creativity happens largely in the unconscious mind after we’ve better trained our conscious mind to observe the world around us. Learn to find your way into the crossroads so your conscious can take in ideas from a variety of disciplines. Live your life to expand and strengthen your filter. Remove distractions and interruptions when it’s time to let the subconscious do it’s thing.

You are creative and you can make yourself even more creative. It doesn’t happen overnight and you probably won’t notice it happening. What you will notice is you’ll have more ideas and you’ll produce more creative work.