You are here:
Home / Blog / Web Design / Counterpart and Counterpoint in Typographic Hierarchy

Visual design is an information delivery system and the smoother that delivery, the better the design. One of the strongest tools we have to facilitate information deliver is hierarchy. Visual hierarchy helps ensure that your most important information is seen first and that viewers are able to take in the amount of information they want quickly and easily.

I’ve written about visual hierarchy in the past, but because of it’s importance in design, thought the topic worth exploring again. Today I want to keep the focus on typographic hierarchy, though we’ll certainly pass through some general ideas of hierarchy along the way. 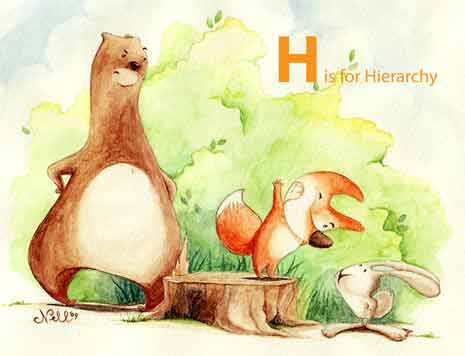 The main way we create hierarchy is through similarity and contrast. When elements share similarity they have equality in the hierarchy. When elements contrast they take on dominant and subordinate roles. In general bigger and darker means more important, while smaller and lighter means less important.

For elements to be seen as different the contrast needs to be large enough.

3 levels of hierarchy is generally al you need. That’s not to say you can’t have more than 3 levels, but you need provide enough contrast to make clear the hierarchy. The more levels the harder that will be.

With 3 levels of typographic hierarchy we’ll have a:

Typically your hierarchy will move from general to specific as it moves from primary to tertiary. Your general points will be the most important and will be seen by most everyone. More detailed information will be there at a lower level in the hierarchy for those people wanting more. 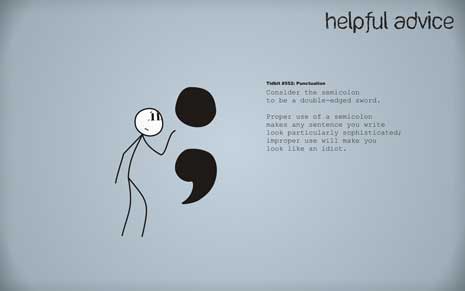 In writing we use things like periods, commas, and semicolons as punctuation marks to help give order to our words. We’ll use paragraphs to separate ideas.

Visually designers use space, horizontal rules, pictorial elements, and bold and italics to separate, group, and emphasize. These are some of our visual punctuation marks. 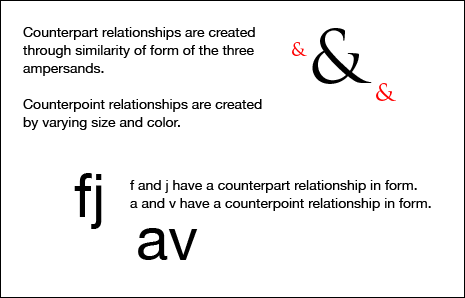 Typographic hierarchy derives from basic pattern-forming, which allows our type to better function as a conveyor of information and gives it a rhythmic and visual structure.

Counterpart and counterpoint are the same similarity and contrast we talk about above.

To create typographic hierarchy we can vary the characteristics of type to create counterpart and counterpoint relationships. We have at our disposal characteristics such as:

A clear hierarchy is created in the 3 ampersands by altering their size and color.

Typographic joinery is the idea of linking and connecting elements through a repetition of structural forms, much like the fj combination that share a similar form.

A good example of typographic joinery is the ABC logo designed by Paul Rand and seen above. Notice that a geometric circular font was chosen and the letters are placed inside a geometric shape that’s also a circle. The entire logo is joined through the geometric circle creating a strong unity in its design. 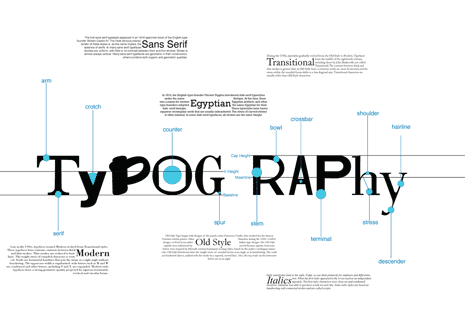 Creating Mystery and Interest Through Typography

A few months ago when writing about sticky ideas I mentioned that mystery is a great way to hold people’s interest. We can use type to help create that mystery. We can think of type as having either questioning or answering forms. A question invites and calls for an answer. The question creates the mystery that is resolved by the answer.

The answer expresses unity and tension relieved. It connects to a specific question and complete the communication initiated by the question. The answer would display a counterpart relationship with the question, though it wouldn’t be as visually prominent when compared to the rest of the page.

To continue the mystery our answer might then lead into another question rebuilding tension and once again standing in counterpoint. By repeating this question and answer, counterpoint and counterpart pattern, we can lend a sense of mystery to our type.

Hierarchy is essential for communication. Think of the people you know who tell a good story. They don’t deliver that story in a monotone voice with a singular rhythm. Their voice rises and lowers. The pace of the story speeds up and slows down. They create tension and then relieve tension only to create tension again. Good storytellers create hierarchy in the telling.

Without hierarchy we’re left with visual boredom. We don’t present content in a way that makes readers want to read. We present to them an uninteresting mass of type that looks challenging to read

Without hierarchy we hinder communication by not leading our viewer’s eye to what they should be seeing and reading first, second, and third. We don’t help them understand what on the page is more important and so we run the risk they may miss it.

By creating a clear hierarchy we do lead our viewer’s to what’s most important and while we can never force every viewer to absorb our message in the exact order we want, we can show them the path through that information we think best.

Through typographic hierarchy we make out content more interesting to read and we allow our readers to more quickly find what they want and decide if they need to dig deeper. We make it easier for people to understand our message.