You are here:
Home / Blog / SEO / My Holiday Traffic Blues

Back in February I reported about a drop in traffic to this site between mid December 2010 and mid January 2011. You might remember that traffic here dropped 20% and that I decided my best course of action was to be patient and wait out the holidays.

Earlier this week when checking stats I noticed a similar drop had recently started. When I compared dates to last year, it was clearly happening again at the same time.

I thought it would be interesting to compare the start of what I assume will be this year’s drop with what did happen last year and to speculate on why it might happen during the holiday season.

I’ll revisit this look at the stats in a couple of months when the hopefully subsequent return of traffic occurs.

In the image above the blue line is search traffic to this site from November 19 – December 19 of this year. The orange line is from October 15 – November 14, also of this year.

I made sure the two lines begin and end on the same day of the week, Saturday to Monday to better compare the numbers.

You can see how consistent search traffic is when we compare day of the week to day of the week. The gap seen on the left of the image is Thanksgiving weekend for this year. Other than those few days everything aligns almost eerily well until the last few days.

Starting on the 16th of December search traffic seems to be dropping off.

Below is a similar image showing last year’s numbers. It should look familiar with the Thanksgiving gap on the left and the traffic drop on the right. Last year’s drop started on the 14th of the month.

The two graphs are too similar not to think there’s something going on more than coincidence. What possible causes could there be for this annual drop in search traffic?

The graphs for total traffic (above and below) also show less traffic for the later month, but neither is as consistent as the search graphs alone. Neither referral and direct traffic show such a direct correlation.

The traffic loss is mainly coming from long tail keywords as total keywords sending traffic dropped about 15% between months.

There are a several reasons I can think of to help explain what’s going on. Traffic naturally falls on holidays as you can see with the Thanksgiving numbers. It also falls on the 4th of July, Labor Day, etc.

The drop off here clearly starts before Christmas, but it’s probably safe to say many people are already in holiday mode and will be for a few weeks.

With the idea of holiday mode already starting, here are a few possibilities for what’s going on.

My blog posting is weaker — Traffic here always spikes on days i post and trails off over the days that follow. I’ve noticed the better the headline, the more traffic visits the post and the more the post then gets spread across social sites.

The increased sharing might lead to increased search traffic for a time, perhaps something to do with a freshness ranking boost.

Like many people I’m slowly drifting into holiday mode and perhaps my posting isn’t quite as good for a few weeks. This would more easily explain losses in referral and direct traffic, but it’s conceivable search traffic would fall off too.

People are searching less for information and more for product — Search traffic here is mainly people looking for information. You’d expect more product searches this time of year and since this site doesn’t have products for sale there should be less search traffic.

It’s possible this alone would account for the decreased traffic here.

Google (and SE’s in general) are tweaking results to favor products pages — For a few weeks on either side of Christmas this could make sense for them to do, while people are in the buying mode.

I tried looking for some kind of proof as I think this the most interesting of the possible causes. I couldn’t find anything though to indicate search engines might be showing different results this time of year.

I tried searching to see if others had suggested this might be happening without much luck. The two posts below allude to the possibility, though also without proof.

People in gift buying mode are paying more attention to ads — It’s also possible that during the holidays ads are capturing attention a little more than they might at other times of the year.

I think the most probable explanation is still as simple as people are going into holiday mode. From there everything else follows.

My own holiday mode attitude probably leads to post titles not being as traffic attracting and it seems reasonable that some are focusing in more on products for a few weeks than information.

The possibility that SEs tweak algorithms is very interesting, though I can’t find any proof so it is 100% speculation. It would make sense for them to do, especially as it’s last minute shopper time.

I wonder though if the holidays alone are enough to explain everything would the graphs be so consistent? Wouldn’t the change in search traffic be a little less consistent? 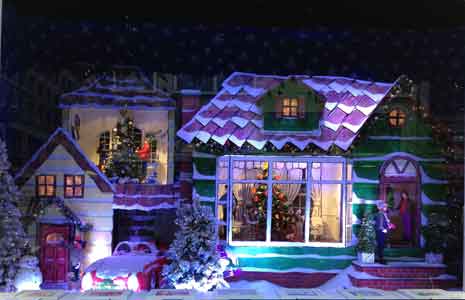 I should have expected to see the drop in search traffic this week, but I had completely forgotten about it. As soon as I checked Analytics, though I knew what was going on. Just as it did last year, traffic was about to show a holiday slump.

The drop appears to have started exactly as it did last year and it’ll be interesting to check back in a couple of months to see if that pattern continues.

I’m hoping it does since the end result was an overall increase in traffic that lasted all year. I’ll let you know what happens sometime in February. If for some reason I forget, please remind me and I’ll grab the stats.

How about you? Does your site gain or lose traffic this time of year? My guess is your answer will depend on whether or not your site is informational in nature or if it sells products.