In order for people to take action, in order for them to share your idea, they need to care about it. That’s where emotion comes in. Emotion elicits a reaction. it makes people act. The emotional component of stickiness is making people care enough to want to share your idea and message. 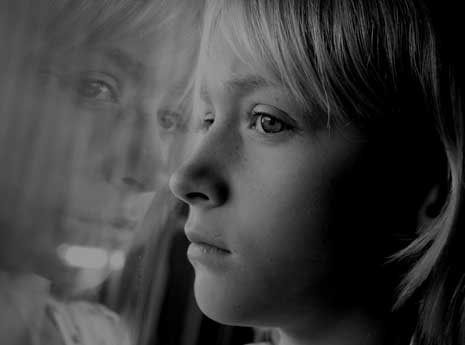 We’re most of the way through this series on stickiness. We’ve created a simple idea, learned how to attract and keep attention, used concrete details to help others understand, and found sources of credibility so our audience will trust our idea. Today it’s about making people care and to make them care we use the power of emotion.

As we’ve done in the previous posts in the series let’s start with a quick review of the 6 Key Variables of Sticky Ideas (SUCCESs) as put forth by the Heath Brothers in their book Made to Stick. 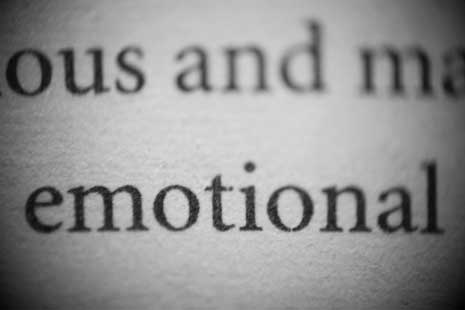 There are 4 main ways to build emotion in your idea.

Each can make people care more about your idea. 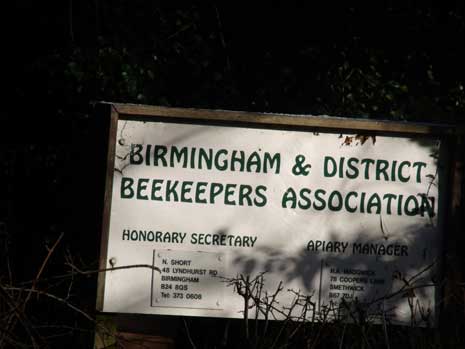 The Power of Association

The simplest way to make people care about something is through the power of association. Form an association between your message and something your audience already cares about and your idea will be able to borrow some of that caring.

When talking about concreteness I mentioned metaphor, simile, and analogy as a good way to associate your idea with the familiar. If you find the right metaphor you not only borrow the details to help understanding, but you borrow the emotion people feel for the metaphor.

However be careful with what you associate your ideas with. Association is easy to overuse and the more something has been used in comparison, the less effective it will be to compare the next thing to it.

The power of association wanes the more it’s used.

The important thing to understand about association is that to get people to care about your idea you need to tap into something they already care about and make a connection. 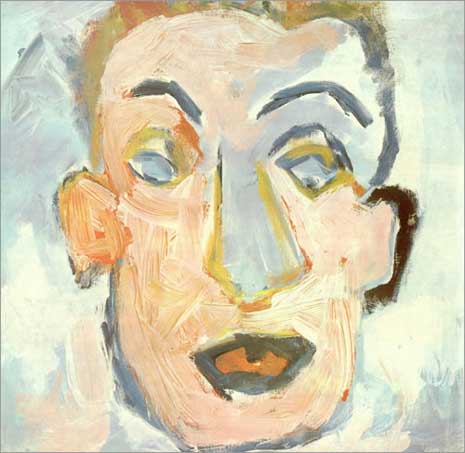 One obvious way to make people care about your idea is to make it about them. Appeal to people’s self-interest. What’s in it for me, after all.

When you get your audience to imagine themselves using your products and services, you cast your audience in the leading role of the story. The whole thing becomes about them.

Even better this lends tangibility to the benefits you describe. The benefits move from being abstract for anyone to something more concrete benefiting each individual member of your audience. 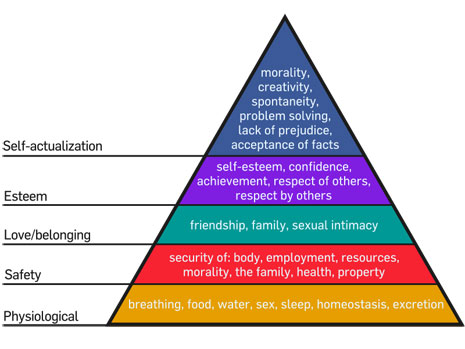 Maslow’s Hierarchy of Needs and Self-Interest

In 1954 Abraham Maslow wanted to understand what motivated people. He boiled things down into several categories of needs often displayed in the form of a pyramid. At the bottom of the pyramid were our physiological needs and at the top was self-actualization.

If you’re unfamiliar with Maslow’s pyramid you can look at the image above or read Designing for a Hierarchy of Needs, which is a post I wrote for Smashing Magazine a few months ago. That post will include plenty of links to other sources about Maslow.

Maslow’s pyramid was later expanded to include several new categories toward the top of the pyramid. The new groupings from top to bottom are:

Maslow’s pyramid is often used by marketers who stress benefits appealing to the needs on the pyramid. Most tend to focus toward the bottom of the pyramid, mainly the physical, safety, and esteem levels. 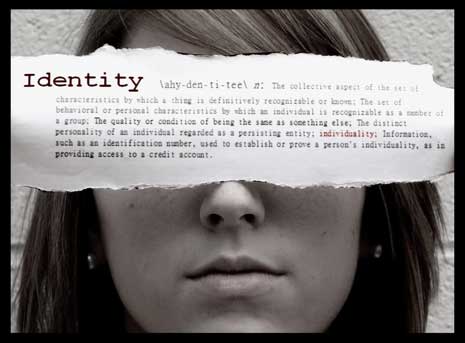 Identity is Stronger than Self

People usually chose the option highest on Maslow’s pyramid for as motivators for themselves and the lower options on the pyramid as motivation for others. We seem think we live in Maslow’s penthouse, while our neighbors live in his basement.

The above might help to explain why marketers using Maslow focus on the bottom levels of the pyramid. The bottom of the pyramid is about our self-interest. However since most of us say we’re motivated by the needs at the top of the pyramid it also suggests you can appeal to those needs as well.

In the 1980s Texas had a litter problem. The state signs suggesting Texans “Please don’t litter” and similar weren’t working. Dan Syrek was hired by the state to help. Syrek featured well known Texas athletes and musicians in commercials. The commercials were similar in showing these famous Texans picking up trash and throwing things away and each ended with the single line

Polls showed that 73% of Texans could recall the message of the anti-liter campaign and within a year litter had declined 29%. The ads appealed to the group, to people’s identity as Texans. 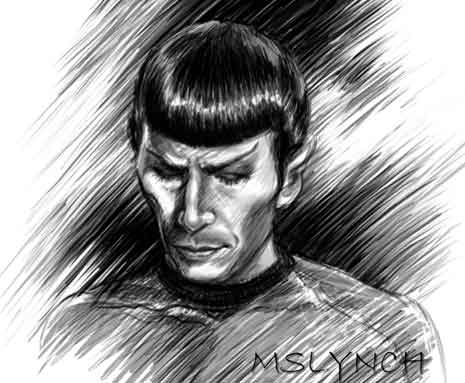 Appealing to the Particular

Once again the curse of knowledge enters into the picture. When we know too much about a subject we start thinking of it in terms of patterns. We think in the abstract. These don’t appeal to people’s emotions though.

We need to get people to take off their analytical hats. Critical thinking isn’t emotional.

Empathy comes not from the general, not from the pattern, not from the abstract, but from the particular, the one. We feel more empathy toward a single individual who is real to us than we do to the abstract concept of humanity. It’s the idea of being concrete all over again and it’s why Mother Teresa focused not on the entire mass, but on a single parishioner.

Most of us know there are many problems in the world. Poverty, hunger, disease. These are all abstract concepts. You know that right now someone somewhere is starving and someone else is serious ill. In fact lots of people are both at this very second and they can’t afford food or medicine. Do you care?

I’m sure you do, though it’s in an abstract way. Are you crying thinking about? Are you rushing out to find, feed, and care for any of those suffering people? Probably not and it doesn’t make you a bad person. It makes you normal. The abstract, the pattern doesn’t make us feel. It doesn’t connect us emotionally.

On the other hand have you ever noticed that many people who get involved in one charity or another do so after a good friend or family member was affected by what the charity is trying to overcome? If someone you know died of a specific form of cancer you’re more likely to donate money or give your time to charities that deal with that specific form of cancer.

You naturally care about your friend or family member who was affected, which made you care more about a specific charity. We feel a deep sadness when a parent passes away from a disease. We don’t feel that same sadness for the many people we don’t know who also pass away from the same disease.

If you want to make people care you need to appeal to the particular, the one, the individual. 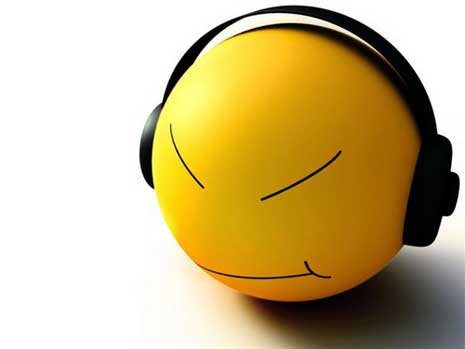 Chip and Dan have a nice summary at the end of their chapter on the emotional aspects of sticky ideas so I’ll give them the floor for a moment.

We get people to take off analytical hats. We create empathy for specific individuals. We show how our ideas are associated with things people already care about. We appeal to people’s self interest, but we also appeal to their identities—not only to the people they are right now but also to the people they would like to be.

And while we should always think about “what’s in it” for our audience, we should remember to stay clear of Maslow’s Basement.

We want people to care as a precursor to making them act. It’s all well and good to have that great idea, get people to notice and understand it and make them believe it. If no one cares about it that’s where it ends. You need to make people care and you do that through emotion.

Next week we’ll continue and conclude by talking about stories and how they provide the knowledge your audience needs to act on your idea and how stories give them the motivation to act as well.