As usual I’ve set up a demo page so you can see css3 multi-columns in action.

A quick note about browser support. Firefox, Safari, Chrome, Opera 11.1, IE 10PP all have multi-column support. As with flexible boxes we’ll need to use vendor prefixes to get everything working, but unlike flexible boxes there doesn’t appear to be any new terminology on the way.

Unfortunately it’s only the coming version of Internet Explorer that has multi-column support, however the fallback is that the visitor sees a single column, which is likely acceptable. Javascript workarounds exist for older versions of IE, which I’ll link to at the end of this post.

Mutli-columns are not new as this 2005 article from A List Apart shows.

The css is simple and straightforward.

You can specify both count and width through the shortcut, but in practice you won’t use both. A pseudo-algorithm is used to calculate one based on the other and outside of some special cases only one or the other (count or width) will affect the layout.

Note that setting up the columns with column-count is more flexible as it allows the width of the columns to vary as the browser is resized.

One last point about column boxes is each has the same stacking context within the multi-column element.

We have a little more control beyond setting up the columns. First is the ability to control the space between columns, which we do with column-gap. By default the column-gap will be equal to one ’em’ though we can change the value of this gutter between columns.

The shortcut above can be written out in full as the 3 properties and they work similar to how borders work.

Column-gaps are equal across a row of column boxes and the rule will be placed in the center of the column-gap. These gaps and rules will have the same height as the column they separate.

Column rules take up no “space’ working more like an outline than a border. They’re painted on the display just above the background. A child element inside a column box with a z-index will thus sit above column-rules. If a column contains no content a rule won’t be drawn between it and its neighboring column.

You probably won’t need to use column-fill that often, if ever. It’s a way to tell the browser how much content should be in each column.

You can set values of auto (the default) or balance, which attempts to fill the columns equally. Unless you’ve constrained the columns though, both will amount to the same thing,

In playing around with the demo I’ve yet to notice any difference when changing the column-fill property, though I assume there are some cases where there is a noticeable difference.

Column-span is more useful as it allows us to have elements span multiple columns. Subheadings come to mind as an example where we may want to span columns.

The only options are all or none so you can’t have an element span 2 out of 3 columns. 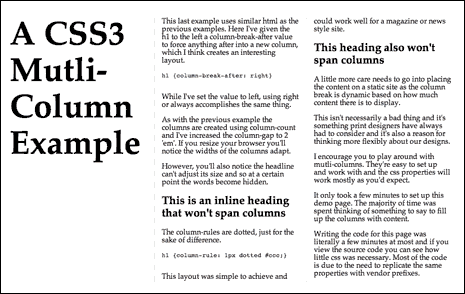 Finally there are three similar properties we can use to control how columns break around an element.

The definitions of the values above are:

The gist of all of the above is that you can force when certain content starts a new column. In practice I find myself using mainly the left and right values or leaving the breaks at the default auto.

If an image or non-breakable word extends into a column gap it will be clipped in the middle of the gap. This is also where the column-rule would be displayed.

It’s possible to constrain columns in such a way that a multi-column element can have more columns than it has room to display.

Below are some Javascript solutions for older versions of IE. I haven’t tried any as yet, but wanted to present them in case you’d like to.

Note: Browser support for multi-columns was more limited when the video above was first presented.

Multi-columns are one of the new css layout modules we should at least begin thinking about if we’re not yet convinced to use them.

They’re very easy to work with as you can hopefully see and can be very useful in creating more complex designs for either static or flexible layouts. Play with them for a few minutes and you’ll be something of an expert.

Browser support is good, though as usual not perfect. There are Javascript workarounds for older versions of IE. Support in most other browsers goes back far enough that it’s likely not an issue.

Even without full support you may decide to use multi-columns now given the fallback is simply a single column. You might not use these columns to develop your overall layout, but you can safely use them to present content inside your layout.

Have you played with mutli-columns yet? If so what’s been your experience?