You are here:
Home / Blog / Blogging / Thoughts On Grammar And Communication

Justin further proposes the reason is that the 140 character limit forces you to think more about what you’re writing. It’s an interesting observation, but in many ways irrelevant where communication is concerned.

Edit: It looks like Justin has correct the grammatical flaw in the post. Originally it boiled down to “I have more friends on Twitter, while Facebook is” or something similar. Again the post was easily understood and the original still read fine.

Aside: Since I’m picking on Justin’s grammatical error I should also point out he’s one of the foremost authorities on WordPress. His blog is one of my first stops when it comes to learning most anything WordPress and if you use also WordPress, but aren’t yet subscribed to Justin’s blog you should correct that right now. Here’s a direct link to the feed. 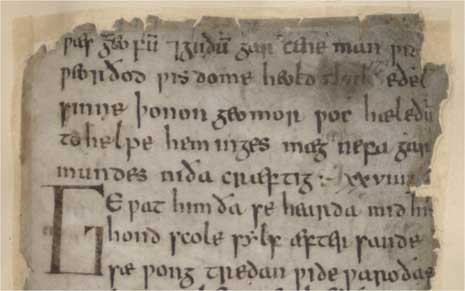 Grammar as Guide and not Absolute Rule

Rules of grammar, whether literary or visual, should be seen as guides and not absolutes. It’s not what your teachers told you in high school, but it’s true.

Language evolves. Grammar changes over time. What’s incorrect today will become correct tomorrow. What we know today as a comma descended from a slash. Before that it was a dot placed at a certain height.

If you doubt language evolves have a look at Beowulf, written sometime between the 8th and 11th centuries. It’s written in English, albeit Old English or Anglo-Saxon. That we call it Old English should be enough to see that language evolves, but take a glance at the epic poem to see how much. The image above is a small part of the manuscript.

It’s been estimated that Shakespeare invented over 1700 words as well as many phrases now in common use. The first time he used them they were grammatically incorrect by definition and yet people both understood and enjoyed his plays.

Lewis Carroll wrote Jabberwocky, partially seen below, using several nonsensical words and yet the message of the poem seems clear.

Whether you want to accept it or not, txt speak will likely become more grammatically correct in the future as more and more people grow up using it. It’s simply the evolutionary nature of language.

Language exists to help us communicate. What’s important is that we’re understood, not that we do so according to a specific set of rules. You have a message to convey and as long as you get that message across you’ve communicated successfully. Whether or not the form of communication is grammatically correct is irrelevant.

The best writers and designers break the rules of the language they use and in so doing advance the language. See Shakespeare and Lewis Carroll above or consider the Bauhaus who went against many of the “rules” of design that came before. 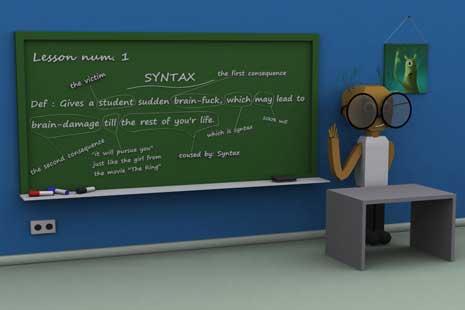 Why Learning Grammar is Still Important

You might think after reading the above that I don’t think it important to learn to use grammar properly. Quite the contrary. In order to break a rule you should understand the rule you’re breaking. You should have a reason for breaking it.

The more we understand, the more informed the choices we make, even when the choice is to go against our own understanding.

Rules of grammar are like standards. If we can all agree that a period marks the end of a sentence or that a space between lines of text marks a new paragraph we can better communicate with each other. It’s ok though to break from standards in some situations, especially where breaking from the standard makes things clearer.

Think about coding a web page. We all know and groan about how Internet Explorer sometimes doesn’t honor standards. We’ve all had to write a hack or two to make something work in IE. Did it make us poor developers to write grammatically incorrect code? Not at all. That incorrect code simply helped us communicate with a specific audience.

Still it was important for us to understand coding standards first in order to understand why something specific wasn’t working in IE and then to understand how to fix it without breaking the code in other browsers. 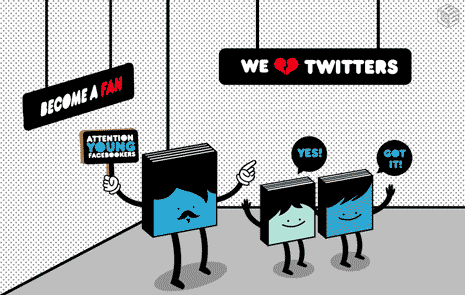 For fun I scanned my own followers and friends on Twitter and Facebook to see if either clearly wrote better than the other. While my scan was far from scientific there was little to suggest that what was written on one was better or more correct than the other.

However I would agree with Justin that the character limit Twitter imposes will get some to put more thought into what they write by necessity. I don’t think it will have any great impact on the majority, but for those people interested in improving their writing, Twitter can help them get there.

In many ways it’s the same as how constraints aid us in design. Our solution has to work within the limits set by the client.

Two of my Facebook friends often wrote grammatically incorrect sentences. Those two people are cousins of mine who happen to be two of the most literate people I know. They’re probably two of the most literate people on the planet and both have been writers and editors their entire lives. One is even co-owner of a publishing company she helped found.

I guarantee they write better than both you and I and yet here they are ignoring some rules of grammar in Facebook posts. Those posts were also among the clearest communication on either Facebook or Twitter, despite not being bound by every rule of grammar.

Both Facebook and Twitter lend themselves to informal use of language. Neither is a place you should expect to see grammatically perfect posts or tweets. And from my informal scans neither tries to meet those misguided expectations. 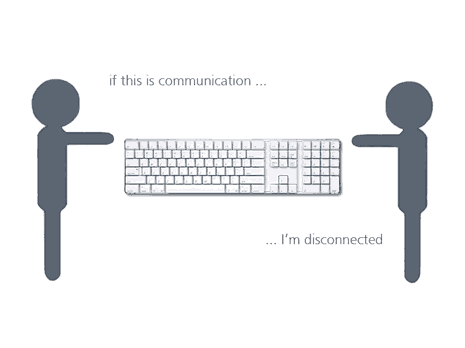 Grammar is important, but what’s more important is communication. If you can get your message across to your intended audience there’s nothing wrong with breaking grammatical rules.

There are places and audiences where your grammar and general use of the language will be judged, so failing to learn the rules of grammar is a no no. Just because you don’t have to use those rules all the time is no excuse not to learn them. You will be able to communicate more effectively the more you understand the language, even if at times you ignore its rules.

Keep in mind that while this post focused on written language, everything here applies to visual language as well. Learn the rules for communicating visually, but remember that those rules can be broken whenever it aids communication.

I’ll close this post with the same recommendation Justin made in his post and suggest buying and reading a copy of The Elements of Style, by William, Strunk and E.B. White. It’s one of the best books you could ever read where learning to write better is concerned.

And accept my apologies for any grammatical errors in this post. However, as long as the message gets through I don’t plan on fixing them.