You are here:
Home / Blog / Whatever / 27 Pictures Of New York: My Thought Process For Composing Images

A couple of weeks ago I flew to New York with a friend to visit my family. During the 4 days we were there, I took about 500 pictures with my iPhone. It’s become my go to camera most of the time. The best camera is the one you have with you after all.

By no means do I consider myself a great photographer. I do enjoy taking pictures though, and for some reason a few people seem to like them and have told me they wanted to see some of the images from New York.

I thought I’d post a few and offer some thoughts about why a scene appealed to me or why I composed it the way I did. Enjoy.

Our first day started with a train ride into Manhattan. Once in the city our morning was trip to the top of Rockefeller center and our afternoon was a visit to the memorial for the World Trade Center.

I’ve posted images from Top of the Rock before and think those images came out better so these will focus more on the latter part of the day and the south side of Manhattan. 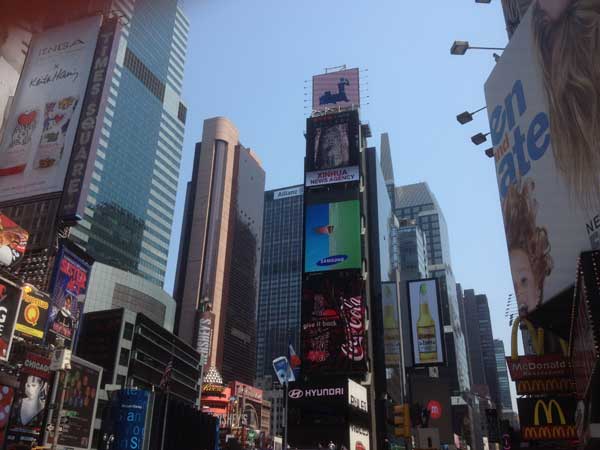 The image of Times Square above was one of the first I took on the day. I always find Times Square so colorful that it’s hard to resist taking a picture. It comes alive a little more at night, but even during the day the colors attract. 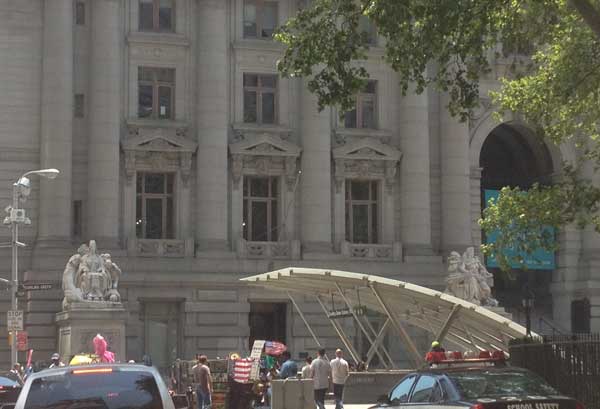 I like how the curve of the Bowling Green subway entrance contrasts with the straight vertical columns of the building behind it. I also find myself taking a lot of pictures in the city that include some kind of foliage. There’s something about the contrast between nature and man-made that I like to capture. 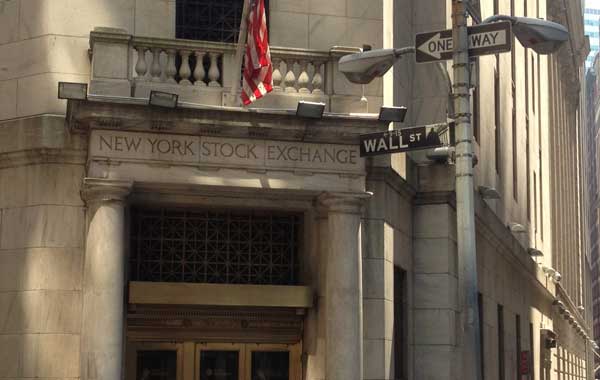 The only reason for taking this image was that I’d never actually been out front of the New York Stock Exchange. I guess I don’t usually walk down Wall Street. 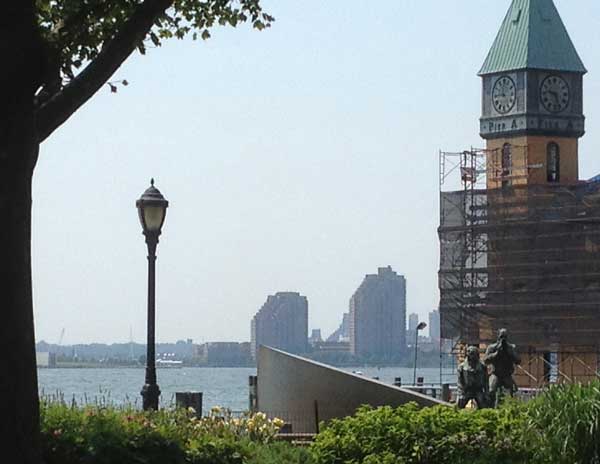 This shot is from Battery Park at the southernmost point of Manhattan. That’s New Jersey off in the distance. I kind of blew it with this image, by not getting the very top of the structure on the right.

What I was trying to do was to prevent your eye from leaving the image by blocking it’s escape along each of the edges (with the exception of the top) The tree, plants, and structure should all force your eye back toward the center of the image. 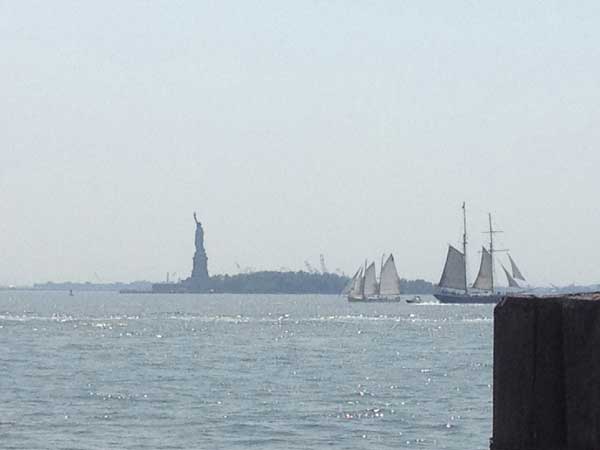 This image of the Statue of Liberty was taken just a few feet away from the image above and looking toward the south instead of the north. I was using the rule of thirds (a simplified golden section) guide on the iPhone to line up where Ellis Island meets the water with the lower horizontal third. 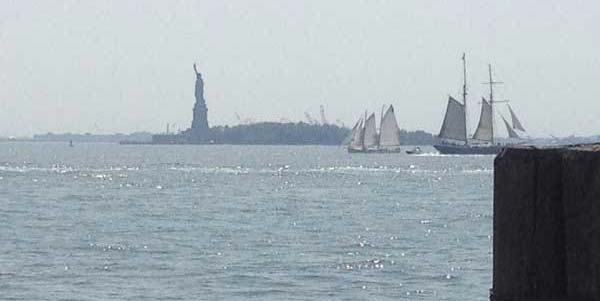 This is the same image with some of the sky cropped out. Since there isn’t much happening in the sky I thought getting rid of some of it would put more emphasis on the statue. I’m not sure if the composition is any better, but that was the goal. 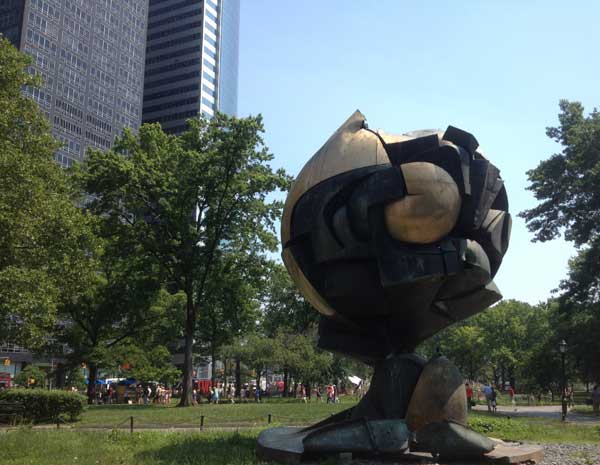 I had no idea what this structure was until my brother told me it was a globe from the World Trade Center that had been crushed. It survived in the condition you see and was moved to Battery Park 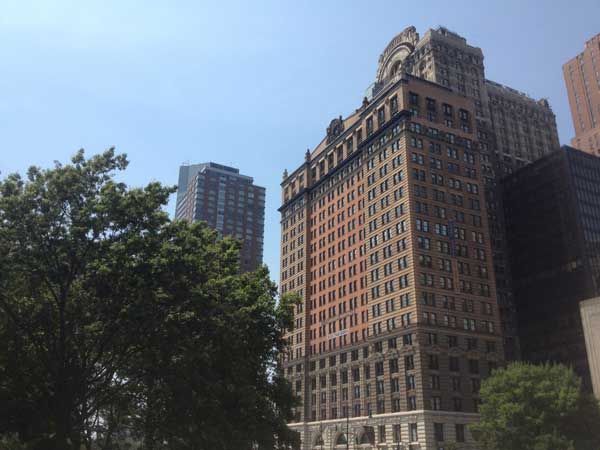 Something about the different colors in the building you see above and below attracted me to it. In the image above I was trying to get the right edge of the building along the right rule of third grid line. 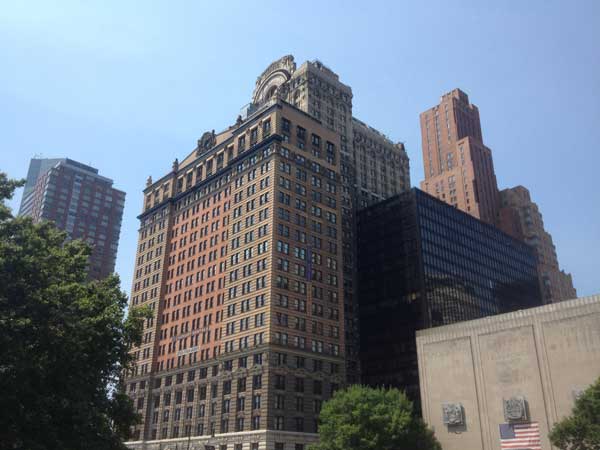 I often capture the same scene with slight variations. Here I turned a few degrees to the right to center the group of buildings. I also pointed the camera up a little. Variations like these let you compare images and learn. Between the two images I like this one more. 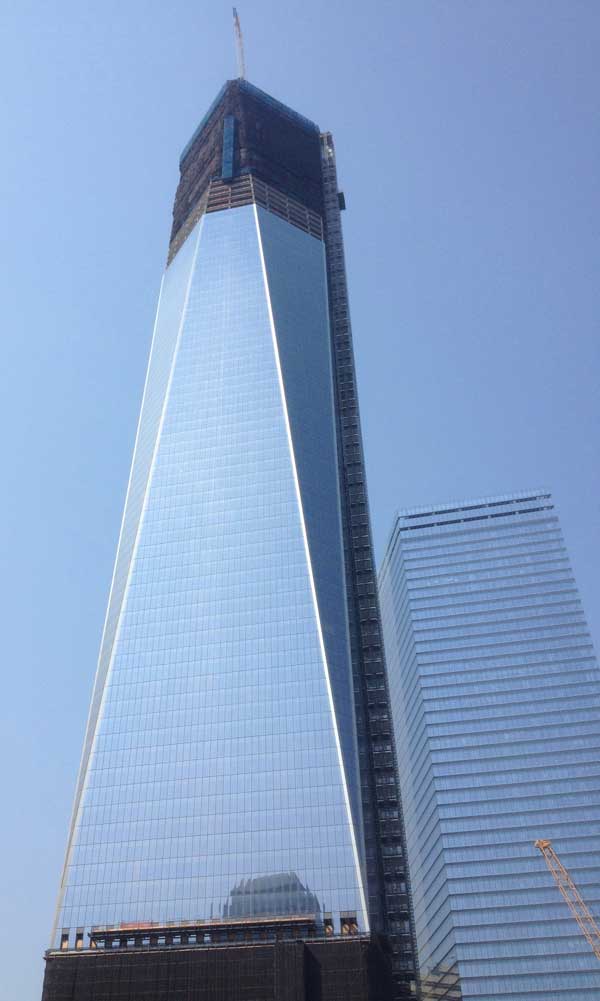 This is the new Freedom Tower that’s going up. There’s some construction happening at the top, but it looks like it’s close to being done. I think it’s going to be the tallest building in the U.S. after it’s finished, though only because of the antenna at the top. 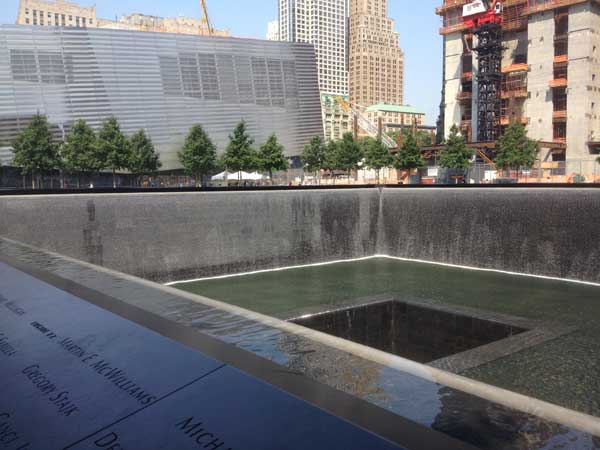 We were in the Financial District to visit the World Trade Center Memorial. The footprints of the old towers are now two pools. This is the south pool. Around the outside are the names of all the people who lost their lives.

With apologies to all of New England, next up was our day at Yankee Stadium for Old Timer’s Day. I didn’t take a lot of pictures of the stadium as I have plenty from a tour a couple of years ago, but I did take a few. 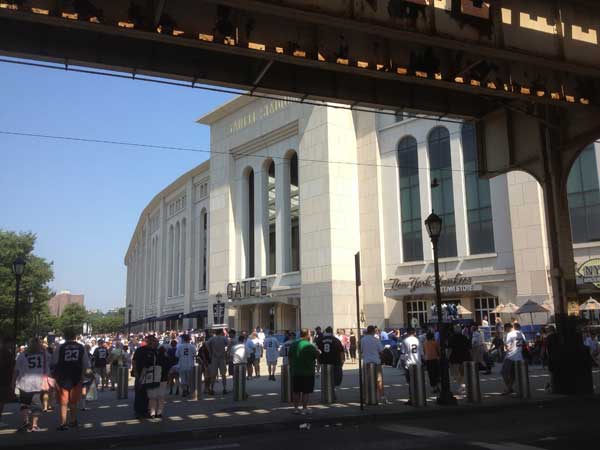 I always get a special feeling walking up the stadium. I imagine it’s a similar feeling most fans have when they approach their team’s stadium. This is the entrance to Gate 6 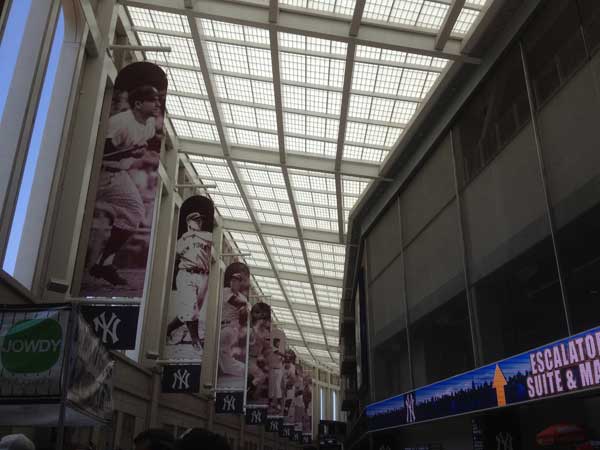 Just inside Gate 6 is the Hall of Heroes. Lining the wall on the left are images of past Yankee greats. It has a way of bringing the history of the team to life. I’m also struck by how everything looks architecturally with the curving perspective. 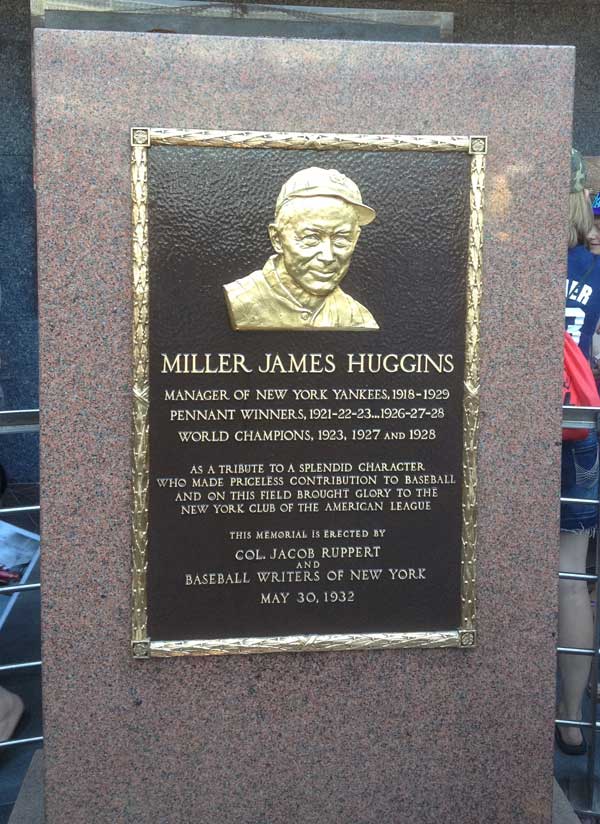 Once upon a time when left centerfield was an enormous 460+ feet from home plate a few monuments like the one above were on the field itself. When the walls were moved in back in the 70’s the monuments became what’s now Monument Park.

The Miller Huggins monument above was the first, after he died unexpectedly in 1929. Monuments for Lou Gehrig, Babe Ruth, Joe DiMaggio, and Mickey Mantle followed. Today there are plaques for every player who’s number has been retired by the team. 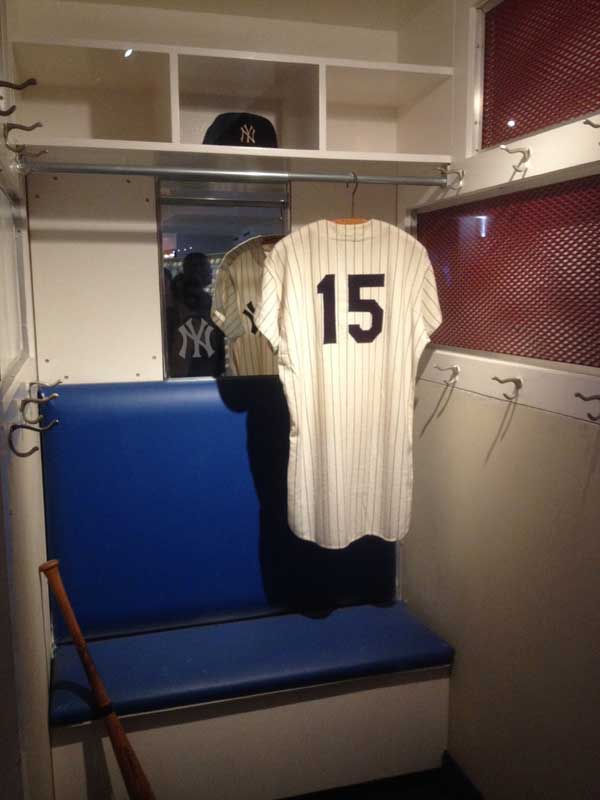 August 2, 1979 is a sad day in Yankee history. Catcher and captain Thurman Munson died while piloting his private plane. His locker has remained unused since and when they built the new stadium a few years ago they moved the locker to the Yankee museum inside the stadium. 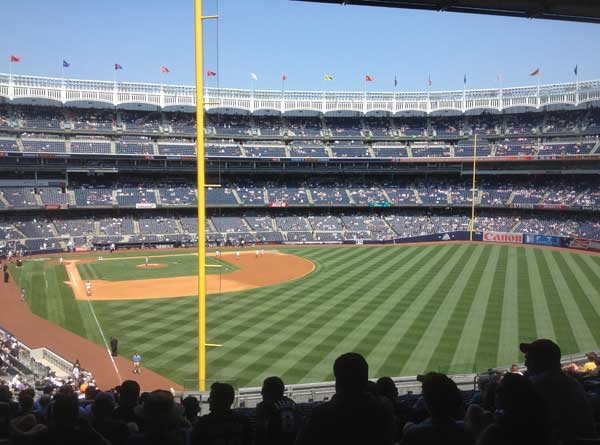 Nothing special about the above image other than it was the view from out seats.

Our last day in New York was spent driving east through Long Island to the very end of the South Fork and Montauk. 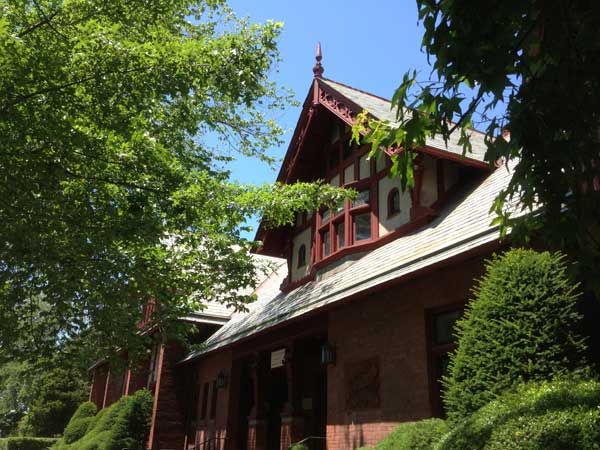 The contrast of colors in the image above is what attracted me to this shot. It’s the old Parrish Art Museum in South Hampton, which has since been moved. We liked this old building better. 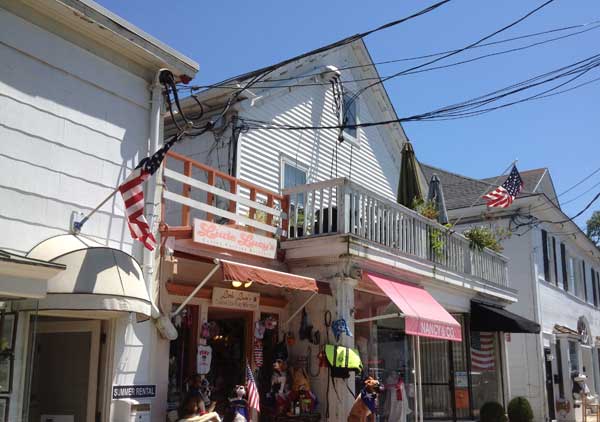 This is a shot taken while walking down Jobs Lane in South Hampton. It screams fishing village to me and there’s a charm to the whole street, which is mainly a lot of shops. 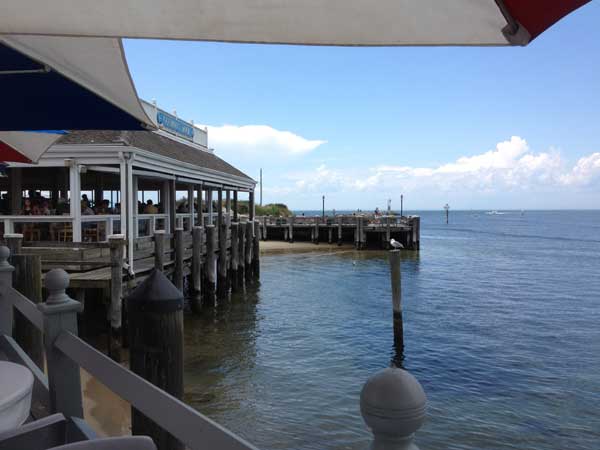 For lunch we stopped at Gosman’s Dock in Montauk for lobster. This is the view from our table looking out over Gardiner’s Bay. To the left is land and to the right water leading to the Atlantic Ocean so I tried to frame the shot that way with the right side being the only open side.

A few degrees to the right of the shot above and cropped. The idea was to show more of the openness in front of us. 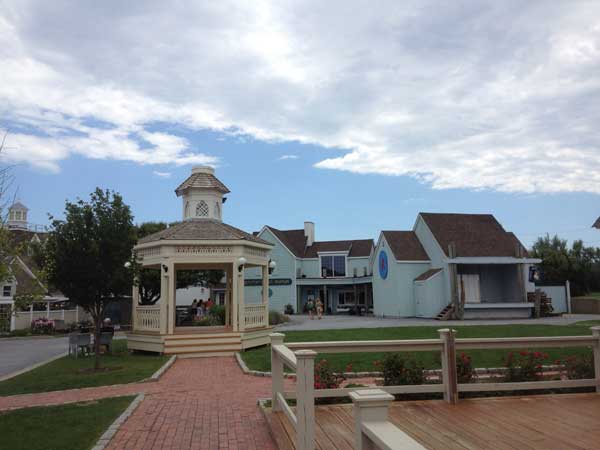 This image is just back from where we sat to eat. It’s the center of Gosman’s Park. The water here would be to the left. This shot isn’t anything special, but I like the variation of shades in the clouds. 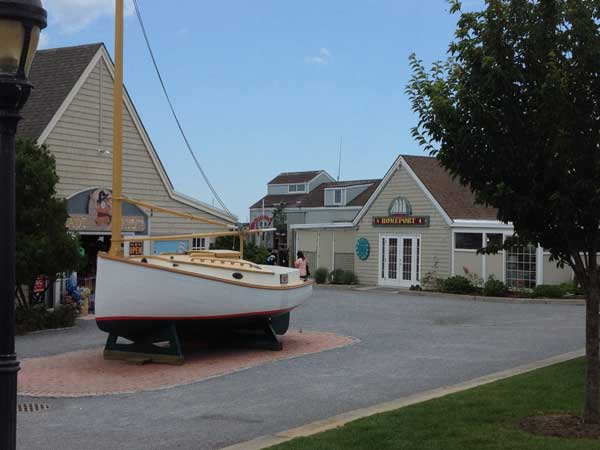 Another shot of Gossman’s on the other side of the Gazebo. The light pole on the left and the tree on the right ideally keep you inside the picture and lead you back to the boat. 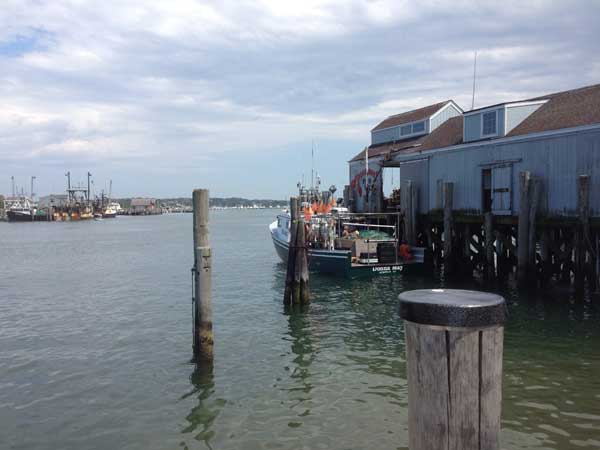 This is the other side of the dock from where we ate. I have a thing for supports like these sticking out of the water. There’s a loneliness to them I think. Here I like how the supports and the structure both lead your eye to the fishing boat. 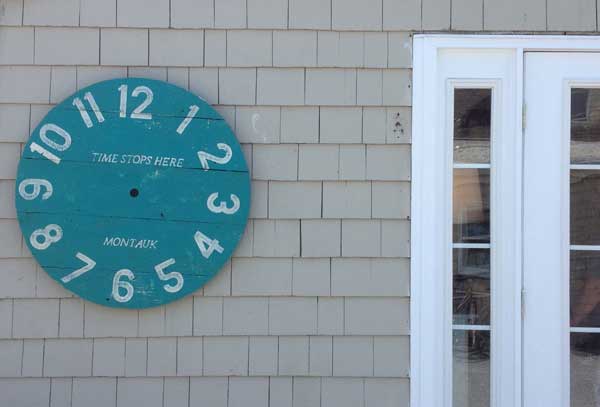 Sometimes you don’t need to do much. A clock without hands that reads “time stops here” is all you need to get something interesting. I also like how well the blue clock is compositionally balanced against the white door frame. 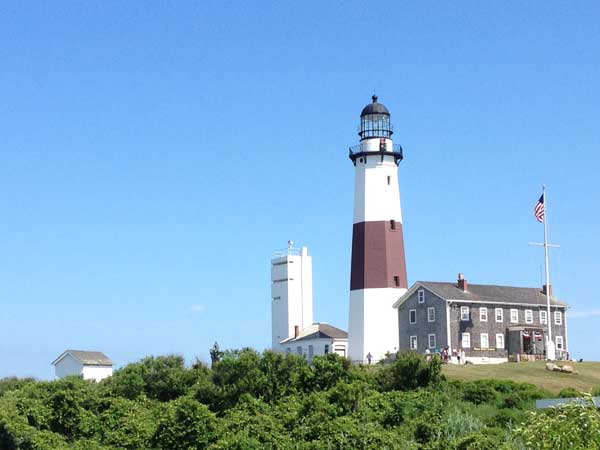 Above and below is the lighthouse in Montauk, which was our destination all along. This is as east as it gets on Long Island. 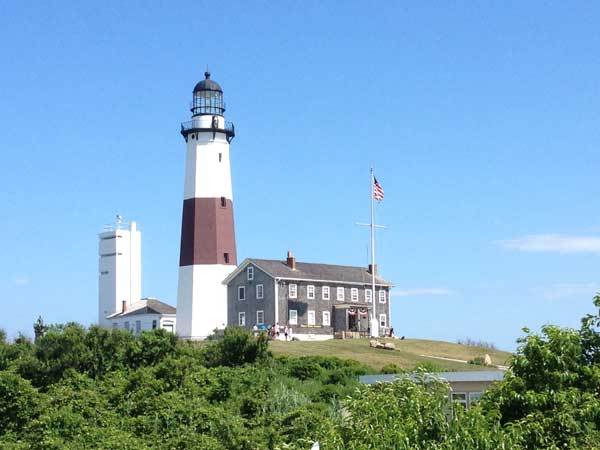 In the shot above I placed the lighthouse on the right rule of third line and then moved it to the left line for comparison. I like this second shot better. The vertical structure on the left and the house on the right work better when everything is on this side in the image. 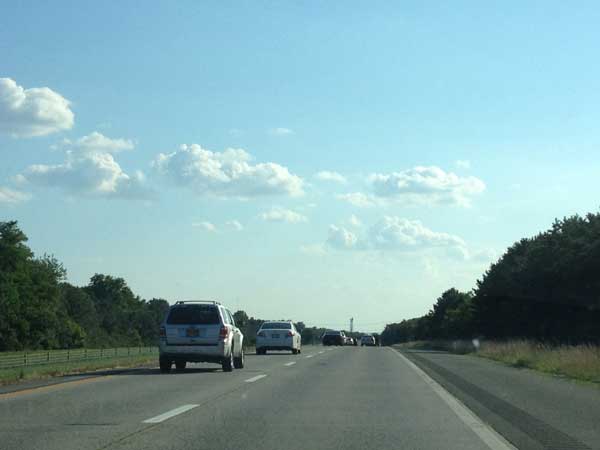 This is shot through the windshield on the drive home. I grabbed it mostly for the cloud formations, though they don’t quite show up in the image as they did live. However I do like how the image turned out with the contrast between the horizontal in the clouds and the perspective of the highway receding into the background.

As with many of the images here I relied on the rule of thirds grid and placed the horizon along the bottom grid line.

That’s my recent trip to New York in pictures. I hope my vacation pics didn’t put you to sleep. There was one day in between where I mainly visited family and stayed in the house. I didn’t take many (or any I think) pictures of that day.

Again by no means do I consider myself a great photographer. Just someone who enjoys taking pictures. Hopefully some of my thoughts for why I took a picture or how I tried to compose it are helpful in some way.

Photography is an easy way to practice and learn more about composition and balance. Much of the time all I do is try to compose the shapes in front of me in an interesting way.

Please don’t take any of my photographic decisions as gospel. It’s all just the opinion of a true amateur who has fun pulling out a camera phone every chance he gets and seeing what kind of images he can capture.