You are here:
Home / Blog / Web Design / An Introduction To Semiotics — Signifier And Signified

The famous pipe. How people reproached me for it! And yet, could you stuff my pipe? No, it’s just a representation, is it not? So if I had written on my picture ‘This is a pipe’, I’d have been lying!
— René Magritte 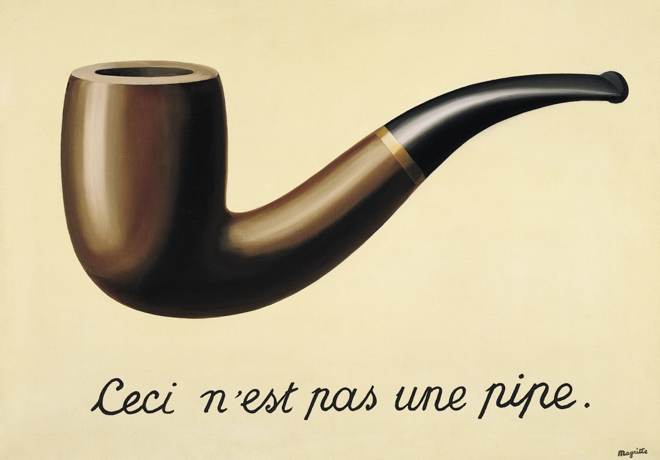 The image above is René Magritte’s The Treachery of Images, sometimes translated as The Treason of Images and if you read the quote above it, you can probably tell Magritte is talking about this painting.

It looks a lot like a pipe to me, but the words underneath say “This is not a pipe” and Magritte is 100% correct. What you’re looking at is not a pipe. It’s a digital image of a photograph of a painting of a pipe. What it isn’t, is a pipe, and if you aren’t convinced see if you can fill it with tobacco, light it, and then smoke it. I’ll wish you good luck as you try.

All this talk about signs not being the same as what they represent is what semiotics is all about. Semiotics is a good topic for designers because it allows us to understand the relationships between signs and what they communicate to the people who interpret them.

If you think about it, just about everything you do when designing a website is about creating a sign of some kind, whether it’s an icon or text label in a navigation bar or a background image that provides context for an article. The words on this page are all signs as well.

I spent the last two weeks talking about icons, both in general and the hamburger icon specifically. I want to spend the next few weeks discussing semiotics. It’s a much larger topic than what I’ll be able to cover here, but I’ll walk you through the basic concepts and try to help you decide what type of icon to use depending on the specifics of what you want to communicate.

Semiotics is the study of signs. Not roadsigns, but something more general. It’s the study of meaning-making and meaningful communication.

Semiotics is related to linguistics, the study of language, but it limits itself to the signs and symbols part of communication. That’s not to say it’s all visual. Words and numbers are signs along with photographs, icons, and roadsigns. Anything that’s capable of representing something else is a sign. Anything that creates meaning is a sign.

The reason for studying semiotics is that is gives us a useful set of tools for identifying and creating the patterns that lead to meaning in communication.

Ferdinand de Saussure and Charles Sanders Peirce are the founders of semiotics, though each worked independently of the other. Ferdinand de Saussure (1857–1913) was a Swiss linguist, who was also the father of modern linguistics. Charles Sanders Peirce (1839–1914) was an American philosopher and the founder of pragmatism. They’re names will come up a few times throughout this series.

Saussure said the sign is the basic unit of meaning and he thought signs were made up of two parts.

Peirce added a third part to signs, the interpreter. He saw signs consisting of:

Imagine a street light at an intersection turning red and several cars stopping. According to Peirce’s model the red light of the traffic light is the representamen (signifier), the act of cars stopping is the object (signified), and the idea that a red light is a command for vehicles to stop is the interpretant. If it’s still not clear, don’t worry. The basic concept should become clearer as we continue through the series.

Peirce said “We only think in signs” and added that anything is a sign if someone interprets it as meaning something other than itself. He also added that signs can be defined as belonging to one of three categories, icon, index, or symbol, which is where I want to pick this up next week.

I realize I didn’t cover a lot in this post, but I want to let the basic concepts sink in before moving on. In some ways they probably seem obvious, but if you were looking at Magritte’s painting and someone asked you what it was, you’d likely respond that it’s a pipe, even though it’s a painting of a pipe or an image of a painting of a…well, you get the idea.

I want you to take away the short definition of semiotics, that it’s the study of signs and that a sign is anything that can represent something else and is interpreted to have meaning.

Next week, I’ll continue by talking about three different categories of signs, icons, indexes, and symbols. I’ll leave today with you another quote about signs that expresses a different meaning about what they can do.