A house divided against itself cannot stand
—Abraham Lincoln

The house Lincoln was referring to was the United States of America shortly before the Civil War. As Lincoln put it, the country was half slave and half free. Two very different messages about what the country stood for. Lincoln further said about the country

It will become all one thing or all the other.

We know now which “all” the country did become and I hope we all agree the U.S. became the right “all.”

Lincoln’s point reaches beyond the socio-political climate of the time. A house, the United States, a design can not stand when divided. Every part must be working toward the same unified goal.

In design working toward the same unified goal is the idea of unity.

What is Unity in Design?

The idea behind the design component unity is to create elements that support each other and all work together toward a common goal. It’s about avoiding mixed messages. Your design elements should look like they belong together and not be arbitrarily placed on the page.

There are two kinds of unity we’re concerned with

Unity is a measure of how well the elements on the page belong together. Through unity a viewer should first see the whole and then the sum of the parts making that whole.

Creating unity is similar to branding. You first establish what the design will be about, what the brand will stand for, and with that in mind create elements or make public statements that reinforce the design or brand. Think consistency around a central message. 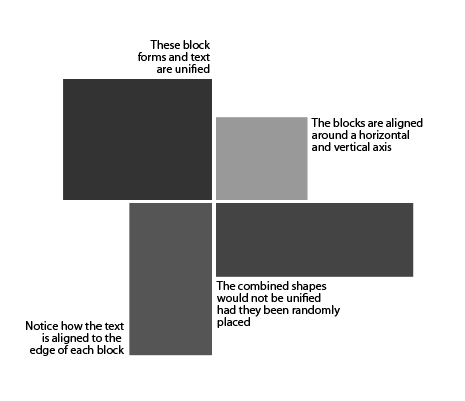 Why Unity is Important

The goal of your design is to communicate a single message or perhaps a primary and secondary message. The more your elements are unified the more of your message you’ll communicate in your design. Your design will impart a sense of being complete and being about a single idea.

Unity holds your design together both visually and conceptually. It emphasizes your concept and theme and helps communicate your message to your reader. Through unity your elements aren’t competing with each other for attention. They are working together to reinforce your message. Through unity your design will be seen as a single complete piece, as a whole and not a group of disparate parts.

Unity and variety can work together. For example your main page heading can be larger with a different font a color than all other text on the page. That will create variety with the text and images around it. By using that same size, font, and color on all page headings across the site, you reintroduce unity into the overall site design.

How to Create More Unified Designs

We can use the basic design principles of contrast, repetition, alignment, and proximity to help us achieve visual unity.

Similarly our choice of images, colors, style, etc. should all be conceptually related to our central idea with the design. If you want to get across a message of openness it doesn’t make sense to box in all your design elements with borders. It would make more sense to create an open layout with lots of whitespace.

It’s unlikely no matter how hard you try that your design will be 100% unified toward a single idea. We all interpret what we see differently. We all bring a lifetime of connections and perceptions to any piece or art or design.

Use your own judgement. Look over your design and ask yourself if everything belongs. The navigation you came up with may look great, but if it doesn’t contribute to the general concept it’s probably better left out in favor of navigation that does reinforce the concept. You can use that great looking navigation on another project.

The final and ideal test of unity is to have a design where nothing can be added or taken away without having to rework what’s left. The relationship between all your elements should be so strong and so right that to change anything would hurt the design. This is the ideal. Can you realistically create such perfection? Probably not and part of any design is knowing when to say enough.

Unity exists when your elements agree. Unity can be seen as the single most important goal of any design; to make your whole design more than the sum of its parts.

Use the the design principles of repetition, alignment, and proximity to add visual unity to your design and use contrast to add variety and interest. Make sure any images you use agree conceptually with your theme.

Through unity your designs will communicate more and more effectively.