You are here:
Home / Blog / Web Design / Why Craigslist Has A Near Perfect Design…For Craigslist

Yes, the Craigslist site is ugly. It will never win any design awards. Phrases like eye sore come to mind when looking at it. Many a designer has offered up thoughts on how to improve it by presenting a redesign, some of which are truly beautiful. However I think the existing Craigslist design is perfectly fine for what Craigslist the site is and I’ll explain why in this post.

Let me assure you I’m not crazy. Ok, maybe a little crazy. Depends who you ask. I do like beautiful things and I think aesthetics are more important than most will give them credit for. If I were designing a similar site today I would aim for a better aesthetics than the current Craigslist design and many of the redesigns that have been presented for Craigslist are better designs.

I’ll point you to a few below and you can see part of one in the image above.

And yet there’s little to no reason for Craigslist to change unless they’re interested in rebranding the site. As you read through this post keep a couple of questions in mind.

A caveat: If Craigslist were my site I would absolutely redesign it. Like many I’d like to see a more aesthetically pleasing Craigslist. My point in this article is more to get you to think about the 2 questions above and to do that I want to build a case for why the existing Craigslist design is near perfect for what Craigslist the site aims to be. 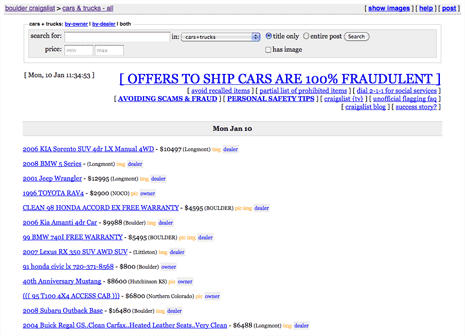 The Purpose of Craigslist

Craigslist is an online version of the classified section of the newspaper. I’ve used it on and off over the years and know many people that use it regularly. I’m sure you’ve been there a time or two as well. While I can’t speak to the motivation of everyone who visits the site I think it’s safe to say there are two main reasons anyone interacts with Craigslist.

I would suggest the latter group above makes up the majority of Craigslist users. Neither of the above tasks is difficult to do with the existing design. In fact both are quite simple. You likely won’t make many errors attempting either task.

Odds are you’ve been to the site and already know how to do both, but let’s assume you’re visiting Craigslist for the first time. In that case you’d be presented with the image below. 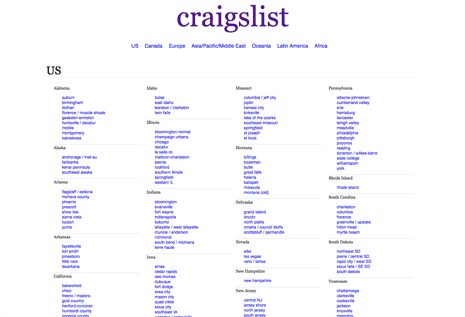 The home page of Craigslist is simply a list of locations. Presumably you’re visiting the home page with an understanding of what the site is about and it wouldn’t take you more than a moment to look for the location nearest to the one you want.

Having found and clicked on the location you want you’ll be presented with a page like the one for Boulder, Colorado below. On subsequent visits a cookie set by the site will take you directly to this local page when you visit the home page, something most people probably want. 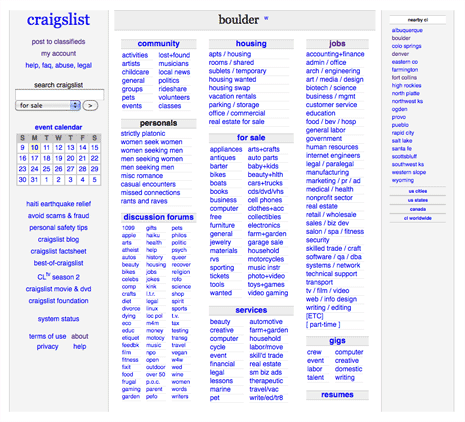 Let’s assume you visited Craigslist to look through the ads, more specifically you’re looking to buy a used car. How hard is it to find the ads? The first thing you’ll likely notice on the page is the list of links in the center. The headings above each section contrast well enough and the wording seems clear enough.

It’s also hard to read one of the headings without seeing a link or two below. Those links meet one of the principles of information architecture, specifically the principle of exemplars

It shouldn’t take long to find the “cars+trucks” link under the “for sale” heading. Clicking that link you’re presented with a list of ads ordered by date posted, which is exactly what you were looking for. How much could the above process be improved by a redesign? 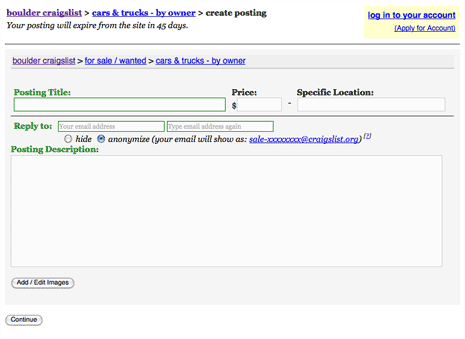 Now let’s assume you’re at the site to post an ad. Again you start at the home page of location links and find the geographic location you’re interested in. Again you probably notice the list of links first and scan them. You’ll either click into one, thinking the posting mechanism is inside, or you’ll continue to scan the page.

If you do the latter it shouldn’t take more than a few moments to find the “post to classifieds” link below the Craigslist logo.

If on the other hand you miss that link and click deeper into the site, it’s admittedly a little more difficult to find the link you want. There is a link to post in the upper right on some pages, though having the link read “post to classifieds” or “post an ad” would probably be a better choice.

Still it isn’t likely going to take you much time to figure out how to post a classified ad (as evidenced by the many millions of ads that have been posted) and having done so once it should take even less time on subsequent visits. 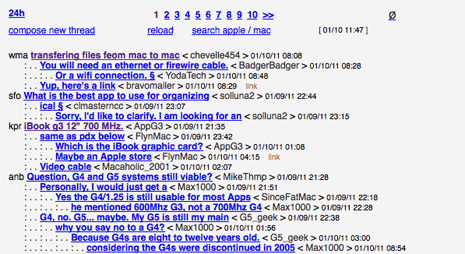 Other Things People Do on Craigslist

There are definitely other things people do on Craigslist such as post to the forums or look up events in the events calendar. Neither of these is any more difficult to find and I’ll still argue the overwhelming majority of visitors want to either post an ad or see the ads others have posted.

Some secondary goals are perhaps slightly more difficult to complete, but none are really what you would call difficult. In a few minutes on the site you’ll likely figure out how to do most if not all of the things you want to accomplish on the site.

Ugly as it might be, it’s rather intuitive what you should do on every page of the site. Some things could perhaps be a little easier, but I doubt many have landed on a page and spent more than a second or two wondering what to do next.

I’m not privy to internal meetings at Craigslist and can’t tell you what they want their brand to be, but when I think about Craigslist I think of classifieds. I think of individual people posting ads to sell things they no longer want. I think of people seeking a roommate or a room for rent. I also think of local businesses listing various jobs.

I don’t expect any of the items I’m looking to buy or sell to be highly polished. I think more garage sale and flea market items than luxury items. Let’s face it, Craigslist is facilitating the exchange of one person’s crap to another person who has a use or want for it.

You don’t expect to visit a garage sale and find a beautiful showroom. You expect a bunch of tables stacked with other people’s unwanted things and you’re looking for something you either happen to need, but don’t want to pay full price for or the occasional gem who’s value is unknown to the seller.

Everything you do at Craigslist is highly utilitarian in purpose. You’re looking to get in, do what you want to do, and get out. You aren’t looking for aesthetic beauty.

If anything a beautiful Craigslist could easily give the wrong impression of what you’ll find inside. Walking into a beautiful showroom you’ll likely expect higher prices and more luxury items. Beautiful aesthetics could send the wrong message as to what Craigslist is. It’s non aesthetic look actually aligns quite well with the brand of Craigslist.

Quite honestly the only reason I see Craigslist redesigning the site is if they want to rebrand themselves as something other than what made them what they are. I don’t see that happening and it would probably make more sense to start a sister site with another brand than to rebrand Craigslist itself. 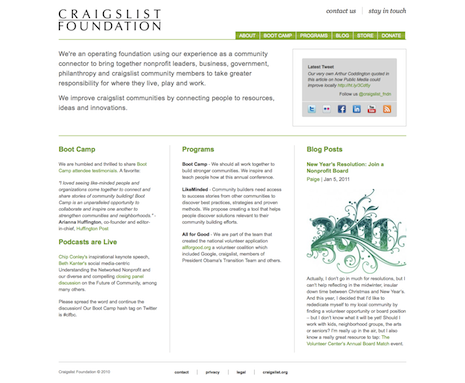 Some Improvements Craigslist Could Make

None of the above is to suggest that as is the design is perfect. Even without a full redesign there are some small improvements that could easily be made.

While I think all of the above would improve the existing design, none dramatically increase the usability of what is already a pretty usable site. Even were you to apply all the changes above I don’t know that your ability to get things done on Craigslist would remarkably change, especially for an existing userbase that is already familiar with how to do things on the site now.

Interestingly enough MacLIfe reviewed several iPad and iPhone apps for using Craigslist a few months ago. Most of those apps are more aesthetically pleasing and probably offer a better overall design than the Craigslist site and yet MacLife came to the conclusion that visiting the site directly in Safari still was still the best option. 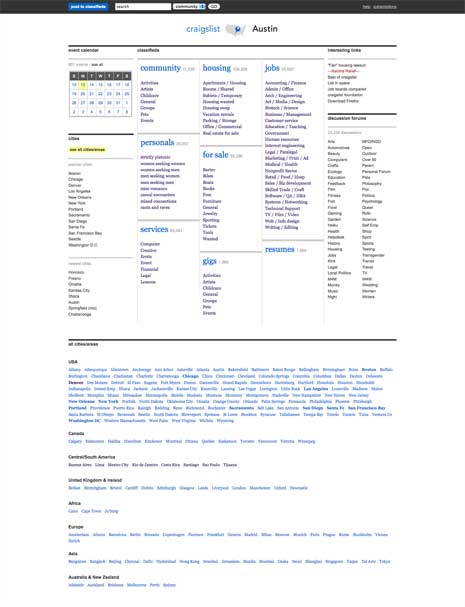 Some Redesigns of Craigslist

I mentioned at the start that many a designer has given the site a new look. Some are truly great designs, my favorite being the one created at SXSW a few years back and seen above.

You can visit a semi-working example of the SXSW design here. Compare this design to the existing Craigslist design and honestly answer whether using the SXSW design is any quicker or easier than the actual Craigslist site, despite how much better it looks.

A couple of years ago Wired Magazine asked some designers to come up with a new look for Craigslist. As with the SXSW designs, the redesigns for Wired are definitely more aesthetically pleasing than the existing Craigslist design, but would they genuinely make it easier to use the site? I don’t think so.

In fact in one case the redesign (Under the Make It Beautiful heading) would probably make it harder to use the site, and again I think this design gives the exact opposite impression of what Craigslist is. It is a beautiful design, though much more appropriate for an upscale shop.

Below are a few more attempts to redesign Craigslist. Most have more pleasing aesthetics and some are downright gorgeous. However as you look through them ask yourself if they’d honestly improve the utilitarian purpose of Craigslist and the usability of the site.

Collection of images of redesigns

Singular redesigns with rationale for choices made 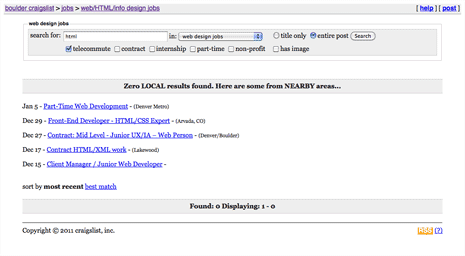 Yes Craigslist is an unattractive site. In fact it’s downright ugly. It’s aesthetics are poor and could certainly be improved in a number of ways. And yet the site doesn’t need a redesign at all.

Does that mean the design of Craigslist should never be updated? No. A few things could easily receive minor updates to improve the functionality of the site.

Some of those updates will probably never happen in part due to the stubbornness of Craig Newmark, but in truth they aren’t necessary, and the site does update things every so often.

Ugly as it is, Craigslist is fine and unless it wants to undergo a major rebranding there’s no reason to touch the design. Ask yourself again what is the purpose of design and design aesthetics and then think about Craigslist the site and brand and you’ll find the existing design is near perfect for what Craigslist is meant to be.

Again like most designers and many non-designers I’d like to see a more beautiful looking Craigslist. The aesthetically challenged design is not one I would create were I asked to do so today.

Hopefully I’ve challenged you to think about your answer to both.