Over the last couple of weeks I’ve offered some boilerplate code and construction details for 2 column and 3 column fixed width layouts. Let’s continue today with fluid or liquid layouts.

The concepts for creating fluid layouts are mostly the same we used in creating the fixed width layouts with a few key differences.

Since much of what we’ll do here simply builds on what we’ve done before I won’t go into every detail for developing fully fluid layouts. Instead I’ll direct you to the previous posts and focus here on what’s new and different.

On the bright side since we’ll skip some of the previously covered details we’ll develop both 2 and 3 column fluid layouts in one post. If you’d prefer to jump directly to the code here’s a link to the demos.

If you’ve been following along with this series the html below should look very familiar. It’s the same html we used to create a 2 column fixed width layout with one exception.

Since we don’t need to do either here, we no longer need that container div. Things are already simpler. Nice.

Again this should be very familiar if you’ve been following along. There are only a few differences from what we’ve already seen.

Naturally since we removed the container div from the html there’s no container in the css.

The first new css is to set the margin to 0 on the body. By default the body will have some margin pushing it away from the browser edge. We want our layout to be right up against the edge so we reset the margin to 0.

The next difference is we’re specifying widths in % as opposed to px. Since we want our layout to adapt to the size of the browser we have to use a relative measurement instead of a fixed measurement.

If you remember the post on the pros and cons of various css layouts I said that fluid/liquid layouts are relative to the browser. That’s why we’re using %. Units like ’em’ are also relative, but they’re relative to the size of the font, which is internal to the design.

There’s really nothing else new here. Just as we did with the fixed width layouts, we’ve floated both columns to the left (we could also float the sidebar to the right) and cleared the footer in both directions.

As with the fixed width layouts we can change the location of columns by changing the direction of the floats.

The potential gotcha is in using % as a measurement. Odds are you’ll want to set some padding or margins on different divs within the layout, and you’ll likely reach first for px. You might try to do the same with other measurements in your design as well.

However as soon as you start adding absolute units like px you’re moving away from a fluid layout. The idea with fluid/liquid layouts is to have all measurements be relative to the browser window so they can resize in proportion as the window is resized.

I should also note that like the fixed width layouts what’s presented here won’t create columns of equal height. The columns in the demo have equal heights, because I’ve explicitly set them to be equal. In practice the column height will change based on what’s inside each.

I’ll have a post on creating layouts with columns of equal height in a couple of weeks.

I’ll spare you further explanation and simply present the code.

Nothing here should be new. If the above isn’t making sense please refer back to the fixed width layout posts and the little bit of explanation for the 2 column layout above.

When it comes to moving columns around you might remember that we needed to use positioning on one of the 3 columns.

The same applies here, though we have to remember to set the value of left as a % instead of px. We’ll also set the body to position relative since we’re no longer using a container div.

Otherwise the explanation for moving columns is exactly the same as it was for the 3 column fixed width layout.

As a reminder for rearranging the columns.

Feel free to ask questions in the comments below if you need further explanation or even better look for the detailed explanation in the 3 column fixed width layout post. 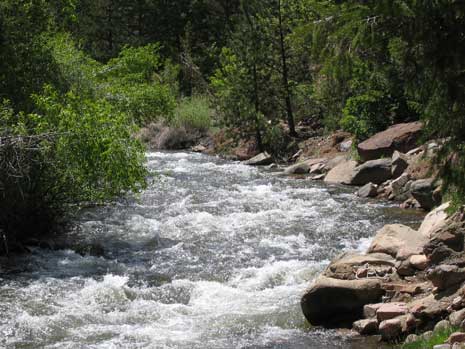 A Word of Caution About Fluid/Liquid Layouts

When I first talked about the pros and cons of different css layouts I mentioned a few about liquid layouts that I’d like to bring up again.

With fluid layouts you give up a lot of control over your design. In some respects that’s how the web should work. We should be giving more control to our audience. However there are times when maintaing control over certain aspects of a design is important.

A major drawback to fluid layouts is that in allowing everything to resize you allow the measure or length of a line of text to resize without any minimum or maximum. That can and does leads to lines of text either too long or too short, which can be uncomfortable to read.

It also means other design elements start reflowing around the text in sometimes unpredictable ways. One way to counter this is by setting some min and max widths.

Unfortunately that kind of goes against the point of having the layout be fully liquid and it can also lead to too much or too little whitespace within your design.

While I think creating designs that are more fluid and adaptable to the different ways our sites and pages will be be viewed is a goal we should strive for, I don’t care much for fully fluid layouts and can’t remember the last time I used one.

I also think that our fluid designs should be relative to something internal to the design and not external to the browser and we’ll get to those designs when we talk about elastic layouts.

Once again here’s a link to the demos.

As with the fixed width layouts, the html and css here are rather simple. If you understood how to build the former you shouldn’t have any problems with the liquid layouts here. The concepts are pretty much the same.

It should also be relatively simple for you to add a 4th or 5th column to your fluid layout. Again it’s the same concepts we’ve already seen.

As I’ve done in the previous posts I’ll encourage you to play around with the code here and see what you can do with it. You need to practice making this code do your bidding before you can truly understand how it works

We’ll continue this series with hybrid layouts, which we’ll find are also surprisingly familiar to what we’ve already seen.